Four wins for the Famous Five 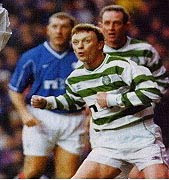 Tony Mowbray, John Hughes, Mick McCarthy and Davie Moyes all steered their teams to victory with Watford’s Malky Mackay missing out as his side drew 3-3 with Leicester.

Yogi got the ball rolling on Saturday as Hibs beat St Johnstone 3-0 at Easter Road, it was squeaky bum time at Celtic before Glenn Loovens delivered the goods whilst down south Wolves and Everton clocked up wins against Fulham and Blackburn Rovers.

Centre halfs have always been seen as management material, most of the qualities that a manager is expected to show are also required of centre halfs with Jock Stein and Billy McNeill the two obvious examples in Celtic’s history.

All five of the former Celtic centre halfs in management fit into that mould, leaders, organisers, battlers who always gave 100% and let their opponents know that they had been involved in a game.

The route into management for the famous five has all been quite similar starting off at smaller clubs and working their way up the ladder although in Mackay’s case Watford is the first step in his ladder.

Learning their trade at Hibs, Falkirk, Millwall and Preston has allowed Mowbray, Hughes, McCarthy and cut their teeth in the game, earn a reputation and make their mistakes away from the public spotlight… unlike our former boss John Barnes.

Only McCarthy played in a successful Celtic side and his role in the centenary season was limited with others such as Lex Baillie, Roy Aitken and Derek Whyte all featuring regularly in central defence but a successful playing career doesn’t often translate into the management business.

The famous five are mainly still in the early parts of their management careers, only Moyes has been in his current job for more than three years, all five still have ambitions to fulfill with Mowbray the boss under most scrutiny.

Managing Celtic is without doubt one of the most challenging jobs in football, the stability that marked the first 90 years of the club’s history has changed entirely and it’s reasonable to assume that it’s unlikely that any manager will last more than four years at the top of Kerrydale Street.

The demands are non-stop, the pressure intense but that brings the thrills of the job, living on the edge knowing that their every decision is scrutinised to extremes with every selection, substitution, transfer and media conference capable of drawing criticism with opinions formed instantly.

Away from the five listed above there are other Celts in management at various levels, at some stage in the future it’s likely that one of the names above will be linked with the club.

Moyes was aware of interest from Celtic during the summer but shied away from the job believing that silverware is a possibility at Goodison Park but it’s difficult to see him getting one of the top four jobs in the Premiership with foreign appointments preferred.

McCarthy is a strange case, his managerial career will forever be linked with the departure of Roy Keane from Ireland’s World Cup squad in 2002. When the Celtic job was available in the summer his naming was absent from those linked as a successor to Gordon Strachan.

As a manager he has mastered the art of taking clubs to promotion to the Premiership, doing it in style for Sunderland and Wolves but at the Stadium of Light Sunderland were relegation certainties from as soon as the season kicked-off.

Wolves have made a promising start to the season, keeping them up with a squad that he has built himself will be a great achievement for his managerial cv.

Yogi is Yogi, a great student of the game and believer in playing the ball on the deck and with skill and flair. Yogi the player was braver than most and dafter than the daftest but worked his way through the ranks to move from Berwick Rangers to Celtic and Hibs, his favourite clubs before making it into management, initially alongside Owen Coyle as joint manager of Falkirk.

In management Yogi has emerged as a scholar of the game, studying the coaching methods of the leading bosses down south and eager to give his players every advantage possible off the park with the appliance of science.

The progress of the Famous Five will be interesting to monitor over the coming seasons, hopefully Mowbrays Celtic will provide the benchmark for the others to emulate.

Quotes from the loan Celts