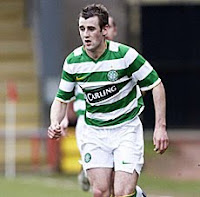 Celtic new boy Niall McGinn could easily have been lost to football/soccer if his heart had ruled his head into pursuing a career in GAA.

The former Derry City winger made an impressive debut against Dundee United on Saturday in a move that surprised the player as much as anyone.

The McGinn story has been a whirlwind over the last two years since he ended his dual sporting career with Dungannon Swifts and Tyrone GAA to concentrate on soccer with Derry City.

One season at the Brandywell was enough to take him into the Northern Irish international squad with the award of Young Player of the Year for the League of Ireland bringing him to Celtic’s attention and a move to Glasgow at the start of 2009.

Whilst speaking to Niall after the match on Saturday he dropped in a mention about playing GAA and only giving it up when he was offered full-time soccer with Derry City.

GAELIC
He said: “I’ve been playing Gaelic since I was eight-year-old right up until I turned full-time with Derry under two years ago. After that I had to knock Gaelic on the head.

“I had an option to play with Tyrone, the soccer was going well for me so I decided to go with that and thankfully it’s proved to be the right decision.”

That prompted some googling on my part, cynically to begin with, as there are often stories from people in one field or profession mentioning what a near miss they had in another career.

Aidan Cassidy and Niall McGinn, who eventually proved tormentor-in-chief with 2-6, posted the goals to supplement Tyrone s eight point haul at the end of the first quarter

Niall McGinn, the Teamtalk Young Club footballer of the year, came on in the second half in place of Philip Toner, both players unable to play for the full game with an All-Ireland Colleges final coming up three days later.

AUTHENTIC
Neither Aiden McGeady or Shaun Maloney could be described as authentic wingers, they are mainly wide midfielders more likely to cut inside than hit the by-line or send in a punishing cross.

While McGinn’s pace and control was impressive on Saturday there was no real target for him to aim at with Scott McDonald the sole striker until Georgios Samaras came on.

To get the most out of McGinn a target man, possibly Chris Killen, playing alongside McDonald would give more options.

MOWBRAY
The return from suspension of McGeady is likely to end McGinn’s first-team ‘run’ but he did enough to suggest that he is a more than useful option for the first team, Tony Mowbray remarked that ideally he’d liked to have had the former Derry City winger available on the bench to give Maloney and McGeady a breather now and then.

Time will tell whether McGinn makes it or not at Celtic but in a flat performance against Dundee United his performance was one of the few highlights.

Hopefully his Celtic career will accelerate leaving no regrets over his decision to give up on Tyrone GAA in order to play for Derry City and earn a move to Celtic.