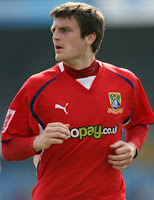 by Joe McHugh Former Celt Diarmuid O’Carroll has taken the scenic route from Celtic along the M8 to Aidrie via Morecambe, Budapest and Cork.

O’Carroll was part of a great Celtic youth team that won the double of league and SFA Cup in 2006 having joined Celtic from Home Farm alongside Darren O’Dea.
It’s a long time since a striker broke through the ranks at Celtic and O’Carroll found his glass ceiling at reserve team level and after a spell on loan at Ross County decided to head south to join League Two outfit Morecambe.
Five goals in sixteen league starts was a decent return by most standards but with his first team opportunities limited he decided to move on from Sammy McIlroy’s side during the summer with Celtic connections never far away.
“I had contact with a few clubs before I got a call from Willie McStay to go out and take a look at Ujpest Dozsa,” O’Carroll said.
INTERESTING
“It seemed an interesting option, something a bit different but the clubs finances seemed quite tight and I don’t think that the directors there were convinced by me.
“I was only out there for three days and didn’t do enough to show them that I was worth a contract.
“The game against Celtic for Cork City was a complete co-incidence. My father knows the chairman of Cork and he had phoned me previously to see how I was placed.
“I was back home in Killarney for a few days when he got in touch with me and asked if I fancied playing against Celtic and I enjoyed the game.
“There wasn’t any real prospect of me joining Cork but when you’re looking for a club it’s good to get some match practice in.”
GLASGOW
Home sickness can be a big factor for any young player making their way in the game but after five years at Celtic the striker from County Kerry has adopted Glasgow as his second home.
England may be the promised land for footballers at all levels but after spending most of last season on the bench at Morecombe Dermo was anxious to get playing regularly again and decided that heading back to Scotland was his best option.
“The collapse of the Setanta deal has had a big effect on clubs,” he added. “It’s very difficult for players to find clubs with money being so tight.
“I got an invite along to Airdrie from a friend at the club and scored twice last week in a friendly against Falkirk and got offered a contract.
REGULARLY
“Managers and coaches in Scotland know me from my time at Celtic so I felt that I’d have a better chance of finding a club and playing regularly.
“I enjoyed my time at Morecambe but every footballer wants to be playing and that wasn’t happening for me at Morecambe.
“My scoring ratio was all right there but there’s no point sitting on the bench when you have a chance of playing somewhere else.
“Moving back to Glasgow was an easy decision to make and now I want to make an impact on the game by doing well for Aidrie.”
Killarney Athletic honour Dermo
Give us feedback