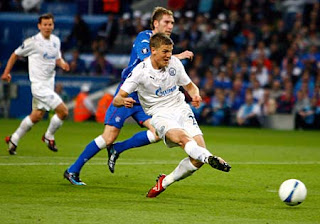 Congratulations to the Herald for some great digging into the licence payer funded expenses of BBC employees.

There must have been some uncomfortable shuffling going on amongst the BBC with the open season going on into expenses claimed by MP’s with the BBC known as generous payers of expenses without too many questions being answered.

Amongst some digging by the Herald it discovered that BBC Scotland Head of Sport Ewan Angus received £190 expenses for two tickets to the 2008 Uefa Cup Final between Rangers and Zenit St Petersburg.
CLICK HERE to view page 2 bottom third of the page.
The relevance of this claim is vague, television coverage was provided by ITV with Scottish Television providing coverage to their area.
FLAVOUR
BBC Radio Scotland did cover the match in great detail with an army of reporters and technicians bringing the flavour of Manchester into every home throughout Scotland.
A nosy through the expenses claim of Angus is fairly boring and mundane but the odd gem does stand out such as his personal purchase and reimbursement for two tickets for that match.
The licence fee paid to the BBC is under great pressure from other broadcasters and news agencies as advertising revenues dwindle and the BBC dominates online news with impressive video content.
Over stepping their public service role is a sensitive area, how Angus can justify his Uefa Cup Final tickets as being in the public interest would be enlightening.
The BBC probably does have a role to play in providing ‘free’ news and information without being dependent of the support of advertisers.
£190 for football tickets is neither here nor there but it does highlight that some supposedly public servants, just like MP’s, seem to think that expenses is a perk of the job for their personal indulgences.
Give us feedback