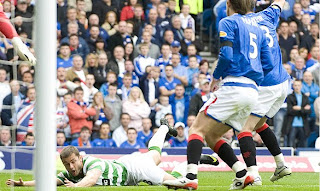 by Joe McHugh Craig Thomson is really fit, he works out in the gym every day and has his fitness monitored constantly by the SFA. On Wednesday the SFA decided to let Sky Sports know just how fit Thomson is.

After his performance on Sunday the fitness of the referee is of no concern to anyone unless the SFA are trying to send some sort of message down south where Sir Alex Ferguson publicly criticised the fitness of referee Alan Wiley after his side drew 2-2 with Sunderland.
As a diversion tactic to the scrutiny, largely online, that Thomson’s performance has attracted since Sunday the fitness feature was virtually pointless.
Daley Thompson was the fittest man on the planet throughout the eighties but was never put forward for football refereeing, basic fitness is expected of a referee and as the pictures and video from Sunday showed Thomson was perfectly placed to make decisions, his placing and fitness weren’t issues, it wasn’t a case of Arsene Wenger-like problems of not seeing the incidents.
INTERVIEW
Thomson did speak during the interview and interestingly did suggest that there were other tough decisions to call but since he refused to discuss them it’s not unreasonable to conclude that he felt that he got the other major decisions correct in the match.
Word for word Sunday’s referee said: “I’ll never probably have another game where I have so many decisions, of crucial decisions to make within the first thirty minutes of the game.
“Making mistakes, we’re only human like players, players make the same mistakes but that’s the way that we develop as referees, there’s no point going away from the game and not learning from the game.
“It’s a big pill to swallow at times.”
Thomson never came across as very confident or comfortable speaking but that’s maybe just my interpretation.
He mentions the number of crucial decisions that he had to make in the first thirty minutes, since he’s only admitted to one mistake, without any explanation being given for that mistake, it’s safe to assume that he feels that he got Shaun Maloney’s booking correct when many of us thought that a penalty should have been awarded.
QUESTIONABLE
There were further crucial decisions throughout the game that looked questionable, David Weir and Kyle Lafferty managed to avoid being booked while Mark Wilson has already gone on record saying that his booking was incorrect.
Will the SFA ask Wilson to explain his comments to the Celtic website or will they hope that the issue is forgotten and that everything moves on.
After side-stepping the penalty issues on Sunday Tony Mowbray has spoken out about it to the Celtic View, using the club’s own magazine to communicate his thoughts to the supporters.
The Celtic manager said: “I have watched the incidents back and I don’t think it would have been harsh if we got three penalties, but we can’t question the referee’s motives.
“He made a decision based on what he thought was right and in the aftermath he has changed his mind, but it’s a bit too late for us.”
Mowbray uses his words wisely and like Wilson it will be interesting to see if the SFA ask him to explain his comments.
APPEALING
The whole issue is unlikely to die down with Glenn Loovens appealing against a one match retrospective suspension handed out after an incident was reported to the SFA after Thomson reviewed the Rangers-Celtic game in May.
The timing of this appeal must be a nightmare and Celtic’s approach will to the appeal will be thorough.
In 2005 the club were satisfied when a three match suspension was handed to Neil Lennon when much lengthier bans were being suggested, that outcome greatly upset Stuart Dougal who had issued Lennon with a red card after a 3-1 Celtic defeat at Ibrox.
Lennon was represented at that hearing by the SPFA’s Fraser Wishart, Gordon Strachan and lawyer Rod McKenzie, Loovens is likely to receive similar support.
EXPLAINING
The SFA are perfectly entitled to stick by their one match ban on Loovens but explaining it will be much more difficult.
What is the criteria for retrospective suspensions, was the Loovens-Maurice Edu the only incident in the match worth looking at again?
How many retrospective suspensions are handed out over a season?
Does every referee watch a tape of their matches to look for decisions that
they missed?
Celtic have kept a low profile over the decisions at Sunday’s match, the comments coming from Mowbray and Wilson suggest that that shouldn’t be interpreted as acceptance, the Loovens appeal next week will show the club’s strength of feeling about these decisions.
In every walk of life people are judged, if a referee can’t get the big decisions right other referees should be given the chance to show that they have the decision making qualities as well as fitness for the big occasions.
Give us feedback