Given still not ruling out hoops move. 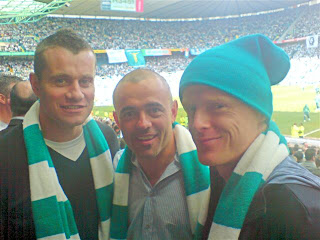 It’s been running for even longer than ‘Robbie for Celtic’ but the idea of Shay Given returning to Celtic one day can’t be ruled out.

The teenager that moved to Glasgow from Donegal certainly made a big impression on those that saw him play for the reserves or youth team although sadly that didn’t include Lou Macari who allowed Kenny Dalglish to take Given to Blackburn Rovers in 1994 before new manager Tommy Burns could intervene.
Now after more than a decade at Newcastle, which must have seemed like a lifetime, Given is at a club serious about winning honours and is viewed by many to have been Mark Hughes best signing for Manchester City.
If Ireland are to overcome France and reach the World Cup Finals in South Africa it will require brilliance from Given to keep the French at bay.
Like Roy Keane through the 2002 qualifying campaign Given has been a man on a mission, desperate to repeat the experiences of Japan and South Korea to make up for the lack of domestic success in his career.
As a regular visitor to Celtic Park Given knows more about Celtic than most and despite his happiness at Manchester City he wouldn’t rule out a possible move to Celtic before he hangs up his gloves.
Speaking to fifa.com about finishing his career with Manchester City he said: “I’d love to finish my career here. I haven’t been here long, but I already feel at home and love the club.
“I grew up a Celtic supporter and they have a big place in my heart, but I really hope I can finish my career here. You can never say never, but I’d like to think I will. “
It wasn’t quite a ‘come and get me plea to Celts’ but despite the obvious difference in finances and indeed prospects between Celtic and Manchester City the lure of an offer from Celtic at some stage would be hard to resist.
The interview with fifa.com was in a Question and Answer style so rather than add some spin and pad it out into something that it’s not I’ve copied through some of the interview below.
FIFA.COM How did you feel when you drew France?
SG We knew it was going to be tough, no matter who we drew. Some people would say that France are the best team in the play-offs, but we’re just focusing on going out there and playing our own game.
FIFA.COM Do you think the absence of Franck Ribery will be a big advantage?
SG Yeah, he’s a top player. But his replacement will be another quality player – France simply don’t have weak players.
FIFA.COM What will the atmosphere be like at Croke Park for the first leg on Saturday? Do you think this will be a big advantage to the Irish?
SG It’s going to be a very special occasion. It will be sold out and the atmosphere will be absolutely electric, so I think this will work in our favour. The Irish supporters are very, very passionate and their support will give us a big lift.
FIFA.COM What would it mean to you and the people of Ireland to play at South Africa 2010?
SG It would mean a hell of a lot to the people of Ireland to qualify. There’s a lot of doom and gloom about with the recession, so it would be good to give the people something to look forward to. I played at the World Cup in 2002 and it was a great experience, the pinnacle of my career so far. I’d love to do that again.
FIFA.COM Finally, do you believe Republic of Ireland will beat France and reach South Africa 2010?
SG We have to believe. We know France are the favourites but that’s fine with us, it means there’s more pressure on them. We need to just play our own game and give it everything. We have two massive games in front of us, but I think we’re in with great chance of reaching the World Cup.
Give us feedback