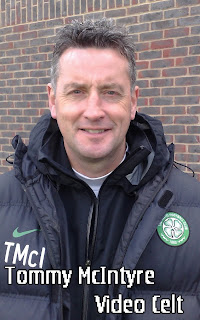 Celtic’s u-19 side travel to the far south-west on Sunday to face Threave Rovers with the Champions League the target for the players.

With the best young players in Scotland and a select few from overseas in the squad Celtic will be expected to win comfortably as they set out to regain the SFA Youth Cup.

Winning is an important part of youth football but it goes hand in hand with developing young players into first team material capable of playing at the highest level of the game.

Mixing development and success is the aim of the club with Tommy McIntyre overseeing the professional level of youth development helping to take schoolboys from the Academy environment into the cutting edge of the game.

McIntyre is hands-on at u-17 and u-19 level and is encouraged by the start that the u-19s have made to the season as he comes to terms with his first season involved with Celtic.
The former Aberdeen and Hibs defender said: “Ultimately our main priority is to develop players for the Champions League, that’s a big challenge but an exciting one.

STRUCTURE
“We’re delighted with the way that the season has been going for the u-19’s. The management structure is new but we’ve assessed the squad and are looking to develop them individually but also as a team.
“In pre-season we were up against European opposition, we just missed out winning the Vilareal tournament but took a lot from that although we have to bear in mind that in Scotland the game is played differently.
“We know that the expectations are high at Celtic but our priority is to develop players as best we can.
“There was a bit of a lull recently in terms of results with the u-19s but we have been working a lot on movement in terms of breaking teams down and we’ve been getting the rewards in our last two matches.
“The boys have turned things around and have developed a ruthless streak, they’ve shown that in abundance against Motherwell and Hamilton who are both up challenging at the top of the league.
“Everyone involved is quietly pleased with the way things are developing.”
Celtic are unbeaten in eight league games this season with four wins and four draws so far.

FRAMEWORK
Having watched the last two matches the team is certainly developing with a good blend of exciting talented individuals working within a team framework that allows them to express themselves on the park.
In theory Greig Spence is a lone striker but James Forrest and James Keatings are both flexible and adaptable allowing them to switch flanks and also to come in and play close to Spence.
Eight goals in the last two games have illustrated the success of those tactics with a confidence emerging amongst the players from achieving results and getting rewarded for the work put in on the training ground.
So far James Forrest has came closest to first team involvement but working closely with Tony Mowbray McIntyre knows that the manager is keen to get the u-19 squad.

ENCOURAGEMENT
McIntyre added: “The manager gives us lots of encouragement and wants to see players pushing on and getting involved at a higher level.
“James Forrest has earned that right and has been training with the first team, he’s also been a first team substitute against St Mirren and Rangers.
“That’s the target and something that other players can be aiming towards. We’ve got as lot of talented players and they need to push themselves and be tested at a higher level.
“The season has been going well so far, ultimately our task is to develop players for the first team and that’s the goal of everyone involved throughout the Academy structure.”