Nice one Gowser- the forgotten Celt 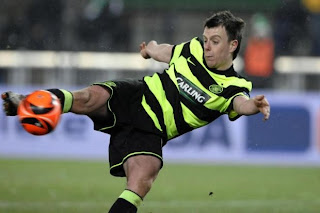 It may be the night that someone scored two goals at once- his first and last for Celtic- but it was great to see Paul Gowser McGowan become a goalscorer.

Adored by Morton fans after a season long loan spell the little striker has found it impossible to break through the lengthy list of strikers that have barred his route to the first team.
Scott McDonald, Georgios Samaras, Marco Fortune, Chris Killen, Cillian Sheridan, Jan Vennegoor of Hesselink, Maciej Zurawski, Kenny Miller and even Ben Hutchison have been in front of McGowan for a place in the affections of Gordon Strachan and Tony Mowbray.
Tonight however he joined that fairly exclusive band to have found the net for Celtic in Europe and the first to score an equaliser after being three goals down within 20 minutes!
McGowan has got lots about him but it’s difficult to get away from the impression that he’s just too small to make it at the top level.
He has an eye for goal, a poachers instinct and can drop deep, link up and play passes but without a real career path into the Celtic first team it’s just not happened for him.
After his Morton loan season he needed to step up a grade but found season 2007/2008 ruined by injury.
The virtual demise of reserve football saw him spend the second half of last season at Hamilton but played out wide on the right rather than through the middle.
Resurrecting his Celtic career at the age of 22 seems unlikely but wherever he moves on to he’ll do so as a Celtic goalscorer having played in the Champions League (at home to Vilareal) and after scoring in the Europa League.
The so-called meaningless Europa League tie with Rapid turned out to be quite explosive with a happy-ish ending as the gloating cheats of Rapid took a sore one as a spirited comeback from the inexperienced hoops silenced 40,000 in the Ernest Happel Stadium.
All across the defence Celtic were ropey throughout the first half as they made an average Austrian side- the nation that launched the career of Filip Sebo- look like Brazil 1970.
I’ll not go over the goals lost, needless to say it was like a compilation of this season’s howlers featuring the worst of Ibrox, Falkirk Stadium, Tannadice and Fir Park.
It could have got worse, Artmedia and Neuchatel were coming to mind but Niall McGinn was on form on the left then Marco Fortune turned a defender and buried the chance like the predator we’re told that he isn’t!
Big Mick frightened their defence with a powering towering header that served notice of our intent even if the referee decided to award a free kick.
McGinn could have helped himself to a hat-trick with a bit of luck on his finishing but suddenly the anticipated mauling had been halted and a text arrived asking if a Liverpool-AC Milan turn around was possible.
The second half was all Celtic with the main threat coming from McGinn now on the right with some pretty sinister and agricultural challenges coming in on the former Derry City winger.
Midway through the second half McGinn’s low pass across goal was driven in by Fortune from within the six yard box and suddenly the world wasn’t such a bad place as Celtic woke up and shrugged off their early nightmare.
McGinn was replaced by debutant Graham Carey 10 minutes later before in added time Marc Crosas picked out McGowan in the box with the striker tucking his first time shot past the Rapid keeper to the delight of the 800 hoops at the match and to the astonishment of television viewers.
In the era of betting in motion it would have been possible to back a Celtic win or draw, at 0-3 you’d have needed treatment, at 1-3 it was worth a punt.
Tonight’s match showed that there’s fight and character around the squad as well as ability.
The fightback tonight or at Motherwell on Saturday probably wouldn’t have happened last season although it was a strong feature of Strachan’s first seasons at the club.
Earlier in the season after the 5-2 home win over St Johnstone Shaun Maloney was asked if supporters could expect results like that throughout the season due to the managers commitment to attack.
Even then Maloney highlighted Mowbray’s determination to cut out sloppy defending, the January transfer window offers a real chance to get something sorted after trying out various options so far this season.
Sorting out the defence must be a priority- doing so would reduce the need for dramatic comebacks which is something that we could happily do without.
PS Apparently Gowsers goal will do wonders for the co-efficient of Scottish football and earn him the eternal gratitude of the nation…
Give us feedback