Joe McHugh | 17:03 20/01/10
share on Facebook
share on Twitter
share on WhatsApp
share on LinkedIn
share on Flipboard
share on Email
Celtic weren’t slow to put their retaliation in on the Daily Record story claiming that Scott Brown had been told that he was no longer required by Tony Mowbray.
The story contained quotes from the player which gave the story extra strength but Brown has been quick to ‘put the record’ straight as is often said with these type of stories. 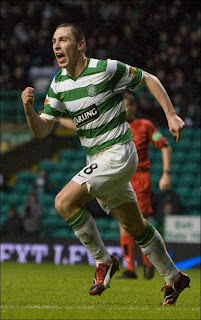 Speaking to the Celtic website the midfielder said: “Obviously I am very disappointed with this article as there is no foundation to it. I have worked with the manager for some time and have a very good relationship with him.

“It’s disappointing to have been out for so long with an injury but I’m looking forward to getting back to full fitness as soon as possible and getting back in to the team for the second half of the season.”

There’s not much room for misinterpretation with those quotes or any possibility that the original words have been ‘lost in translation’.
The Record claimed: ‘Tony Mowbray has stunned star man Scott Brown by telling him he has no future at Celtic.’
Celtic famously fell out with the Daily Record in December 2002 following a front page story that is almost as famous as ‘Freddy Starr ate my hamster’ when the newspaper ran with the ‘Thugs and Thieves’ headline relating to the behaviour of players on a Christmas night out in Newcastle.
A cold war followed between the two parties but the Record and Celtic need each other with the relations eventually being patched up although the Record’s double decker bus in Seville six months later wasn’t the most popular.
Football clubs and personalities regularly threaten to take legal action against newspapers, and other than the prolific Martin O’Neill these issues get forgotten over the course of time.
Whether Celtic take legal action remains to be seen.
The Celtic statement added: “The story, which appeared on Wednesday morning, has been dismissed by both Tony Mowbray and Scott Brown as being totally without foundation.

“The club is currently taking legal advice over the issue.”

Tensions have clearly been raised with the story going a step further than the usual transfer speculation that football clubs expect at this time of the year.

The final ten days of the transfer window will make interesting reading for everyone. If relations have broken down the Record won’t hold back, if a compromise has been reached between the club and newspaper then a series of positive stories are likely to appear over the coming days.