Get over it Gary

Gary Caldwell is now a Wigan player, a Premiership star alongside Titus Bramwell, Mario Melchiot and other anonymus millionaires at the DW Stadium.

Money is the motivation for 90% of footballers and Caldwell has reportedly signed up to a four and a half year deal worth £25,000 a week- three times his Celtic wages.
Mission accomplished.

Caldwell has made good use of the Bosman rule just as he did at Hibs where he signed a pre-contract agreement before moving to Celtic on a free transfer and pocketing another significant rise.

There isn’t really any need for Caldwell to go bitching on Celtic’s offer or lack of an offer to keep him.

Whether it was the moneymen or manager that made the decision Celtic have clearly decided that they’ll get better value out of Jos Hooived than Caldwell.

The new Dutch signing is quite happy with the terms on offer at Celtic which makes Caldwell’s comments today seem silly. Hooived is preferred by Celtic while Wigan have also got their man.

Claiming that Dermot Desmond and Peter Lawwell forced him out Caldwell said: “You have to ask Peter and Dermot if they underestimated me as a footballer. 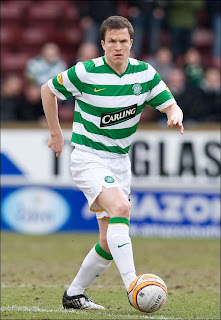 “They judged me and their judgement was a little bit off from mine. I have no regrets, I had three and a half years there and they were great for me.

“Hopefully I was good for them but the boss had one opinion and the club had a different one. I think the club won in the end.

“The gaffer told me at different times he wanted me to stay. Ultimately we came to a crossroads and it went the wrong way for me and my future at Celtic.”

Caldwell can now concentrate his energy and anger into proving Celtic wrong starting tomorrow in the glamour clash away at Wolves.

Over the piece Caldwell did a good job at Celtic, probably the most successful example of the Bosman ruling but being chased by Wigan and Middlesbrough is probably a fair indication of his ability.

Captaining a Celtic side in which a number of his team-mates were earning three times as much as he was was clearly something that rankled with the defender.

Keeping things quiet and in house may have earned him a better deal at Celtic, a significant rise in salary had been on the table for over a year but he chose to rufuse exactly as he did at Hibs.

Caldwell chose at times to discuss contract matters in public, a tactic that may grab some headlines but unlikely to go down well in the Celtic boardroom or win over supporters split over his ability.

Life goes on for Celtic and Caldwell, Hooived probably has no idea the expectations that are being invested in him by the Celtic support.

A mixture of Johan Mjallby and Roy Race will be hard to live upto- playing his part in reclaiming the SPL title shouldn’t be asking the earth.