Bellamy told to stay away for three months!

Joe McHugh | 09:28 19/02/10
share on Facebook
share on Twitter
share on WhatsApp
share on LinkedIn
share on Flipboard
share on Email
Former Celt Craig Bellamy looks to be on the move again with reports that Manchester City boss Roberto Mancini has banned the striker for THREE MONTHS!
Five years ago Bellamy was at the heart of Celtic’s faultering title bid before moving on to Blackburn Rovers, Liverpool and West Ham before joining Manchester City for £14m last January. 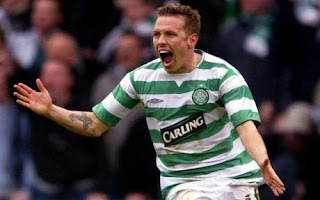 Following the sacking of Mark Hughes Bellamy was reported to have complained to the club bosses about the sacking and has never really got on with Mancini.
The former Inter Milan boss seemed to prefer Robinho over the Welsh striker with their relationship taking a turn for the worst last week.
When The Sun does these type of stories they tend to be well sourced and not rushed through which suggests that there is plenty of truth to the incident.
The Sun claims: “The manager was yelling ‘Why are you always questioning me? Why won’t you do as you are told? Why are you always questioning everything at training and in games?’.
“Bellamy argued back that he only wanted what was best for the club.
“But Mancini snapped ‘I want you to leave now. And do not come back for three months’.”
Bellamy has missed City’s last two matches, both 1-1 draws with Stoke.
Meanwhile loan Celt Cillian Sheridan is hoping to give Celtic a pre-match boost ahead of tomorrow’s SPL clash with Dundee United.
Sheridan scored twice for St Johnstone in their 5-1 win over Hibs on Wednesday and is looking to take that form into tomorrow’s clash with Rangers.
He said: “I’ll probably have a few calls from the Celtic lads wishing me well and hopefully I can do them a turn. I’d like to help them out.
“Rangers have a 10-point lead but I don’t see why Celtic can’t peg them back. It’s happened in other leagues so why not here in Scotland? There’s always a chance and Celtic will keep fighting. “We lost to Rangers in the semi-final of the League Cup, that was a disappointment but we have to take the form from the Hibs game into this one to cause an upset.

“I’m expecting to get a bit of stick if I start. That goes with the territory. It’s not something that bothers me. These are the sort of games any player wants to play in. I’m no different. We are looking to kick on from the Hibs result.
“From a personal point of view, I came here hoping to enjoy my football again. If things carry on through to the end of the season and I score more goals I’ll definitely do that.
“It was great for the confidence to score twice against Hibs. It was a relief and a weight off my shoulders when I got the first early in the game.”
Sun report on Bellamy