Joe McHugh | 23:00 01/03/10
share on Facebook
share on Twitter
share on WhatsApp
share on LinkedIn
share on Flipboard
share on Email
James McCarthy has ignored the advise of Gary Caldwell and will make his full international debut for Ireland against Brazil tomorrow night.
The long road from being rejected by the Scotland u-16 squad to becoming a full internationalist for Ireland will be completed when Giovanni Trapattoni gives the Wigan midfielder his first full cap. 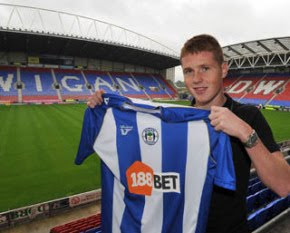 Despite the many obstacles that were put in front of him and hostility throughout the country Caldwell thought that he might be able to sweet talk the 19-year-old into an international u-turn.
McCarthy listened, smiled and ignored Caldwell and will be welcomed warmly into the full Irish set up against Brazil tomorrow night.
“He had a chat with me but nothing was going to change,” McCarthy admitted about the Caldwell approach, apparently made with the approval of Craig Levein.
“He (Levein) spoke to Gary about it, as I say, because Ireland have done so well for me in everything they’ve done for me, I was delighted to be part of it.
“It’s a bit frustrating when it keeps coming back now and again. I don’t know where it’s coming from, I don’t know who’s saying it, I just have to block it out and just get on with my own game.
“I got a couple of phone calls from Ireland asking what’s happening but I told them from day one that nothing was happening and it’s just paper talk.”
“Liam Brady was on and I told him nothing was happening and he said to keep working hard at my club and see what happens.
“Scotland said I wasn’t good enough, Ireland came in and I was delighted to go and represent Ireland especially for my granddad who was so proud.
“I was told by my advisor at the time that he asked Scotland to put me in a squad, but they said we’ll leave him now, he’s not better than what we got. 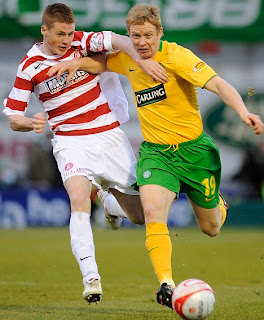 “Ireland came over and watched my first game and put me in. It was Seán McCaffrey who came over himself and he is a really good fella, he looked after me and my family.”
McCarthy won’t be a fully fledged internationalist in the eyes of Fifa until he plays a competitive match but even the persuasive powers of Caldwell will find it tricky to turn the situation around.
Portsmouth’s Marc Wilson will also be making his full international debut for Ireland after turning his back on Northern Ireland.
The Belfast based association are far from happy about the number of players from the six counties who are opting to join up with the Football Association of Ireland with Everton’s Shane Duffy following the example of Derry born Darron Gibson in moving south to experience international football.
With attention turning towards McCarthy the Duncan Ferguson of Irish football, Stephen Ireland, continues his international exile at Manchester City where he regularly pops up questioning the important and purpose of international football.

Paul Hyland of the Evening Herald has produced a great article on the background and politics involved in these decisions CLICK HERE to read it.