Joe McHugh | 12:15 26/04/10
share on Facebook
share on Twitter
share on WhatsApp
share on LinkedIn
share on Flipboard
share on Email
Ever-present Deccy Gallagher is hoping to crown his season by adding the SFA Youth Cup to the SPL u-19 title won by Celtic at the weekend.
The young hoops kept the momentum going by beating Aberdeen 1-0 on Saturday but it was understandable that some minds were straying towards Wednesday’s Hampden showdown.
Gallagher has been an imposing figure at the heart of the Celtic defence throughout the season and is looking forward to finishing the season in style. 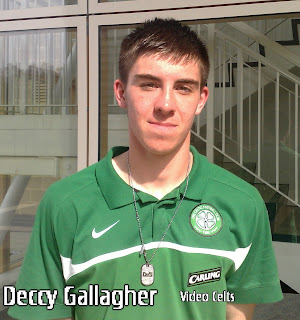 “This will be the biggest night of my career,” the defender admitted. “And it’ll be the same for the rest of the players. We’ve had a good season and it would be a great achievement to win a trophy at Hampden.
“At Celtic there are always expectations and that’s something that we have to deal with. We’ve had two tight games with Rangers in the last few months and I’d expect it to be close again at Hampden.
“Winning at Murray Park gave us a huge lift in the league, there wasn’t much between the teams then Greig Spence popped up with a goal near the end.
“A draw wouldn’t have been good enough in that match, we knew that we had to win and it was a great feeling to get the points that day.
“We’ve kept the form going and are on a good winning run but we know it will be a hard match at
Hampden. Playing in a cup final against Rangers will be a great occassion, there’s bound to be a bit of nerves about but that gives you the edge to play at your best.”
Gallagher started the season alongside Declan Gallagher ( no relation) in central defence but has been playing alongside captain Matty Hughes since the season resumed in February.
Despite his size he likes to knock the ball about and laughs at the back handed compliments about his passing ability.
He added: “The coaches here like me to express myself on the pitch. When people look at the size of me they don’t expect much, when they see that I can play a bit they get surprised! My first job is to be a defender but I like to show that I can play a bit as well.
“Playing for Celtic is a massive thrill for me, I’ve always supported the club and when Tommy Burns spoke to my dad about joining Celtic I was delighted. It was an honour to sign and to pull on the jersey.
“I never take anything for granted, every time I put on the jersey I know what it means and what’s expected of you. Being part of a league winning side has been a fantastic experience.
“I’ve had a couple of games with the reserve side and got a taste of what could be ahead of me when we played against Shamrock Rovers.
“Going to Ireland and playing in front of a full house was a great experience. Mark Wilson, Paul Caddis and Paul McGowan were in the side and showed me what’s demanded at Celtic.
“It’s been a great season for myself and the u-19’s, winning at Hampden on Wednesday would be the perfect end to the season.” 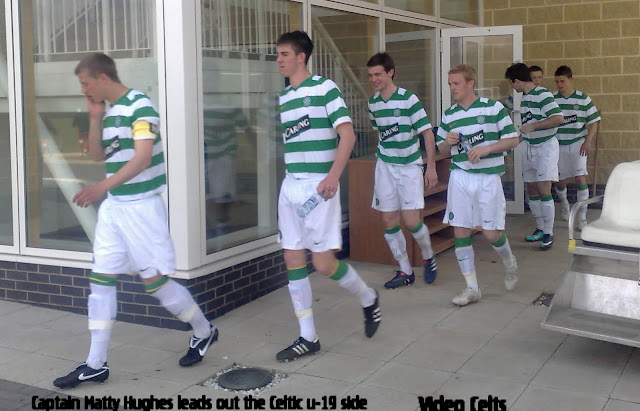 Matty Hughes is followed out by Deccy Gallagher, Grant Gallagher and Michael Ordish
Give us feedback