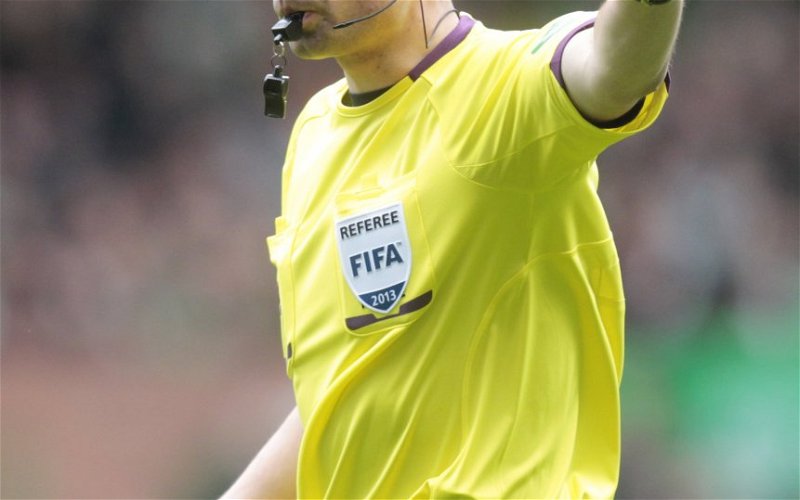 Neil Lennon wasn’t holding back as he was interviewed by Radio Scotland after his side’s 2-2 draw with Kilmarnock.

The Hibs boss was sent to the stand after Kilmarnock equalised from a penalty with Kris Boyd converting the rebound after Ofir Marciano had blocked the initial effort.

Kevin Clancy then raced over to the touchline to send off Lennon who had a very frank exchange of words with the official.

“We should be able to send referees off… I’m at my wits end with them, it’s amateur stuff.”@HibsOfficial manager Neil Lennon is furious with referee Kevin Clancy. https://t.co/Nsek6i8HYy pic.twitter.com/5iZEeppPOS

The Hibs boss had to watch the remainder of the match from the stand and wasn’t slow to express his anger with Clancy when he was interviewed by Radio Scotland after the match.

Asked about his ordering off Lennon said: “I don’t think that I warranted being sent off hence my reaction. It is not a penalty, it is the same referee that missed a clear hand ball for us against Rangers. I think that he has guessed because it has hit Ryan (Porteous) on the elbow, so it can’t be deliberate handball so it has cost us a win today again.

“The same official who cost us a clear penalty decision at Easter Road (against the tribute act), I’m not happy with the standard of refereeing this season, I’ve tried to keep my consul a lot but it has cost us a lot of points.”

QUESTION: Do you think you’ll get into trouble for your reaction?

“Probably, probably but you should be able to send referees off for their decisions, their performances instead of sending managers off. We’re trying to do our job and they are costing us points, that could cost us a European place, a lot of money. It’s not the first time Clancy has done that, I’m not happy with the standard of refereeing at all.”

QUESTION: Have you had the chance to look at it back?

“Yes, it’s not a penalty, the ball is going a mile wide, it’s hit Ryan on the elbow, it’s a scandalous decision but one that doesn’t surprise me.”

QUESTION: Have you had a chance to speak to the referee?

“I’m not going to bother my backside to tell you the truth. I’ve had enough of them this season already. I will probably get a ban because of them because of their incompetence

“We’ve done brilliantly this season. We scored a perfectly good goal against Hearts that was disallowed. We had a clear handball against Rangers by the same referee (as today) not given then today. I won’t say anything to them, it’s amateur stuff.”