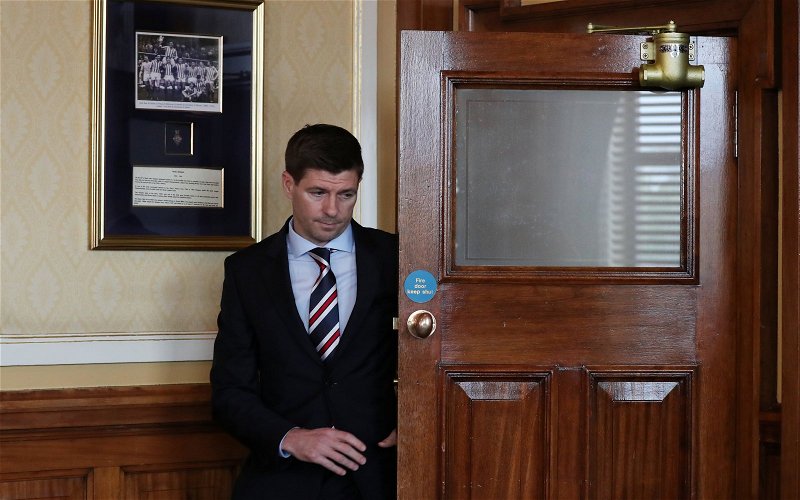 Steven Gerrard has admitted that the Sevco transfer war-chest has been emptied.

So far the former Liverpool u-18 coach has brought in seven new players but only paid transfer fees for Connor Goldson and Nikola Katic.

Speculation about bringing in Lucas Levia, Jermaine Defoe and Martin Skrtel has quietly been parked as reality kicks in.

Every word from Gerrard has been welcomed as the expressions of a football visionary by the gullible while Dave King has been forgiven for inflicting Mark Warburton, Pedro Caixinha and Graeme Murty on the people.

Rather than come out and state that there is no more money to spend Gerrard has discussed squad numbers.

As the January transfer window demonstrated there is no outside interest in the Ibrox flops recruited since the tribute act reached the top flight with the Chinese moonbeam about Alfredo Morelos not up for discussion.

All eyes are now on Director of Football Mark Allen who has managed to get Joe Dodoo, Micky O’Halloran and Jason Holt off the payroll but failed to bring in a single transfer fee.

Speaking to The Sun Gerrard said: “I am also aware that if we get the areas sorted out that we feel need sorted it will make the squad too big.

“We will have to edge a few out and be honest with people and say to them that maybe they are not going to get the game time they want.

“That is football at this time of year and all players are aware of that but they are making it very tough because training has been very intense, it has been quality and everyone is pushing to stay here, which is a good thing.

“If there is one thing that I am really delighted with it is the application and focus and that people want to be here.

“I’m not sure how it was before, but everything we have asked of them in terms of lifting standards and pushing, everyone wants to be part of it, which is great.”

Eduardo Herrera, Fabio Cardoso and Bruno Alves were missing from the sunshine training camp and aren’t in Gerrard’s future plans.

Unfortunately the first two are under contract until 2020 with veteran Alves hanging on to the final 12 months of his deal. That trio plus the on-loan Carlos Pena are sucking £100,000 a week from the wage bill.

Typical of the haphazard ‘planning’ at the club is the fact that they have three goalkeepers and just one striker!