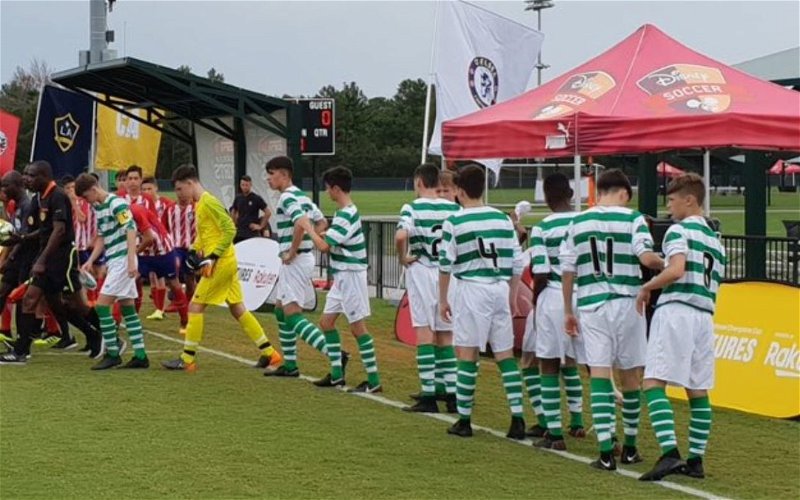 Celtic’s u-14 side lost out to Chelsea in heart-breaking fashion at the International Champions Cup semi-final stage in Orlando.

After drawing 2-2- including a stoppage time equaliser for the young hoops- they went ahead on penalties only to lose out to the English side who now face Bayern Munich in the final.

The match was televised live on ESPN across America and streamed live on Facebook with the commentators positively drooling over the way that Celtic played, beating Atletico Madrid, DC United and the ICC All Stars to reach the last four where Paolo Maldini and Alessandro del Piero were among the crowd.

John McLaughlan’s side played with a confidence and purpose way beyond their years, they understood the game perfectly and played down the flanks with great combinations throughout the side.

GOAL! And it’s @CelticFC who break the deadlock! Are they on their way to the Championship final?#ICCFutures presented by @ICCFutures pic.twitter.com/mKrVXyjJDh

PICK THAT OUT! Incredible finish from @CelticFC!! They’ve tied it up at the death! We are heading to penalties!!#ICCFutures presented by @RakutenArena pic.twitter.com/WQPRdYa6WZ

Early in the second half (30 minutes per half) Ben Summers came in off the left to put Celtic in front but seven minutes later Chelsea equalised.

It looked all over with three minutes left when Chelsea took the lead but in stoppage time McKenzie Carse rifled a shot home from 20 yards out to take the tie to penalties.

The tournament ended at that point for Celtic but if those players continue to develop then there will be plenty of success to enjoy in the years ahead.