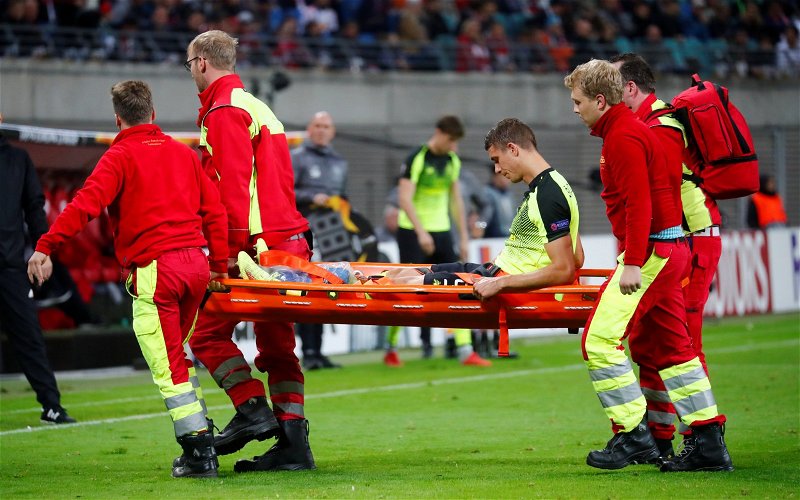 Celtic have two new defensive injury worries to contend with after the 2-0 Europa League defeat from RB Leipzig.

A hamstring strain saw Cristian Gamboa replaced at half time while Jozo Simunovic was stretchered off with 15 minutes left to play with what appeared to be an ankle knock.

With Kris Ajer out injured and Dedryck Boyata suspended for the Betfred Cup semi-final against Hearts on Sunday Brendan Rodgers has very few options at the back for the Murrayfield clash.

“Jozo is struggling, he took an awkward landing,” Rodgers admitted at the post match media conference. He’ll be a question mark for the weekend.”

On Gamboa the Celtic boss added: “He felt a tightness (on his hamstring) so we’ll have a look at it tomorrow and see how it is.

“When you come off with that sort of injury there is obviously a major doubt.”

Rodgers kept Filip Benkovic on the bench after admitting pre-match that they had to be careful with his Achilles.

The on loan Leicester man looks an essential starter against Hearts on Sunday with Jack Hendry the only other available central defender.

Tom Rogic’s knee injury will be assessed on Saturday but it seems likely that Leigh Griffiths will join Scott Brown on the sidelines as the hoops attempt to reach the first domestic final of the season.