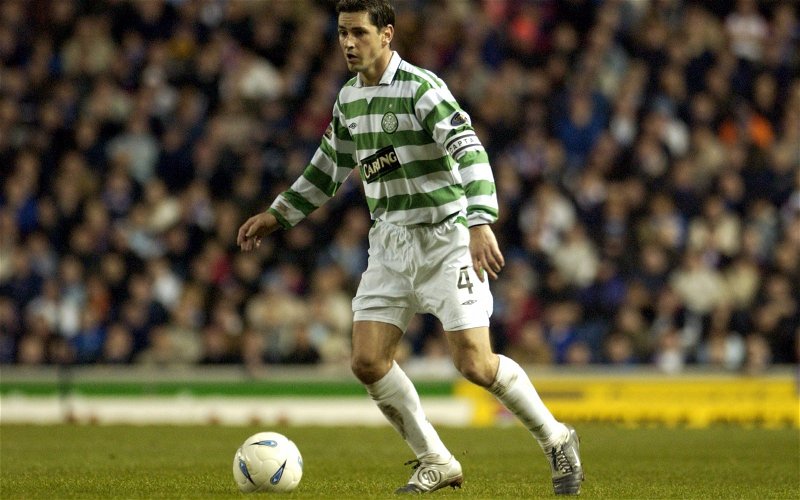 The former Celtic defender has been on Instagram for a while but has now taken the leap onto Twitter or the ‘nut house’ as one fan described the social media network.

Within an hour and without any confirmations he had attracted 1,000 followers.

the best youve ever seen !!

You’ve always been a legend in our house! pic.twitter.com/xpVWVKoMOa

hey Jackie, great to see you here, if i can just take this opportunity to thank you.

back in the 90s when u were a lad, i met u in Holland at big Pierre’s amateur club (Gouda?) and I said to you “u gotta stop the ten”

u did, u delivered, I thank you

Welcome Jackie, you were my idol as a kid, we’d have you back in the number 4 any day if you were young again. HH

McNamara joined Celtic in a £600,000 deal from Dunfermline in 1995 just as Tommy Burns was putting together an exciting new side at the rebuild Celtic Park.

Over the next decade he played under six different managers playing a key role in the iconic sides that Stopped The Ten and went to Seville.

Henrik Larsson and Paul Lambert were the only other members of that elite group with McNamara outlasting both of them before quitting Celtic for Wolves.

In management he took Dundee United to the 2014 Scottish Cup Final and brought in record transfer fees for the club through Stuart Armstrong, Andy Robertson, Gary Mackay-Steven and Nadir Ciftci.

Despite that financial lifeline someone inside the club decided to leak the detail that the manager’s modest salary was topped up by a share of transfer fees received.

Stephen Thompson is no longer at Dundee United.