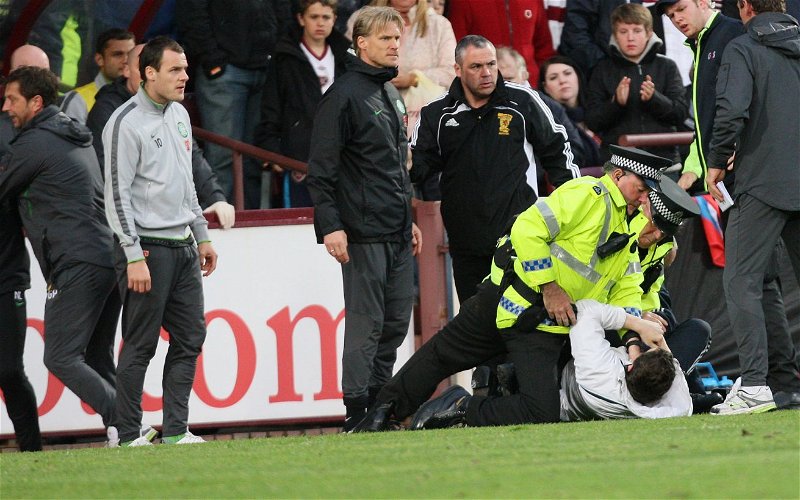 Gary Caldwell has issued a half hearted apology for his ‘brings it on himself’ comment about Neil Lennon last night on Radio Scotland.

Listeners were astonished when the Partick Thistle boss trotted out the favoured old line of the apologists happy to justify attacks on the wealthy Irish Catholic.

Once again Tynecastle was the venue as a Hearts fan struck Lennon on the face with a pound coin late in the match.

Just to clarify what I said tonight I said because I am a former team mate of Neil and like him a lot and I fear one day he could be seriously hurt by one of these idiots. I don’t condone the fan in any way and hope that the authorities punish them as severely as they can.

“Ultimately it comes down to the individual.”

“It was a pound coin, so he must have a few quid on him!”

Hibs boss Neil Lennon shares his few after he was struck by a coin during his side’s 0-0 draw vs Hearts. pic.twitter.com/G6SMqp1hCd

“I’m fizzing about it. It’s disgraceful. I don’t blame the club – you can’t legislate for the hatred of some individuals”@HibernianFC‘s Neil Lennon speaks out after being hit by a coin at Tynecastle Park:https://t.co/7gTnhvrx7H ?? https://t.co/qZ0sndIvns

Blaming Lennon for most of the problems in Scottish society is par for the course, especially for pundits on Radio Scotland but some listeners were dismayed when a current manager and former team-mate decided to use that excuse.

The coin would almost certainly have been thrown by a Hearts season ticket holder and came three days after another Hearts fan was caught on video celebrating hitting a 70-year-old woman in the face with a bottle.

Having overlooked an incident last month when a Sevco fan cut the head of an assistant referee during a defeat at Livingston it will be difficult for the SPFL to take action against Hearts for the assault on Lennon.