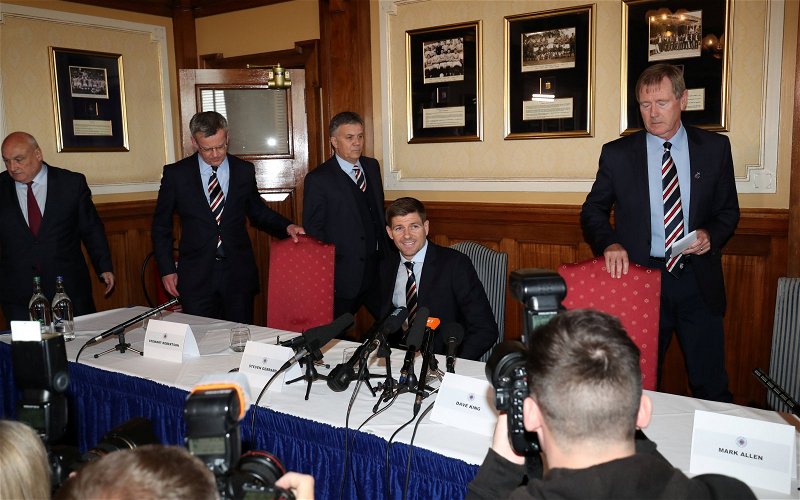 When it comes to burying bad news Sevco really are in a league all of their own- unlike the SPFL where they trail in behind Hearts, Celtic and Kilmarnock keeping Hibs and Livingston company in fourth place.

Fifteen minutes before kick off in last night’s 1-1 draw with Kilmarnock the club slipped out their accounts for the year to 30 June 2018, which doesn’t include the cost of the Ge55ard Revolution.

Losses for the Caixinha and Murty Revolution came in at an eye watering £14.3m which is some achievement on a turnover of £32.6m.

Spin is everywhere surrounding the accounts but auditors Campbell Dallas are obliged to give their opinion on whether the company is a going concern.

MATERIAL UNCERTAINTY RELATING TO GOING CONCERN We draw your attention to note 1 to the financial statements concerning the Group’s ability to continue as a going concern. In order to continue operations for the next 12 months the Group is dependent upon raising additional finance to cover the projected shortfall of £4.6m in season 2018/19 and a further £3.0m in season 2019/20.

Such amounts are inherently dependent on a number of key variables, including the achievement of forecast football performance and player trading. Should certain inputs to the cash flow not be achieved as forecast, the projected shortfall could be materially higher than that detailed above.

With litigation building up against Dave King and the costs involved in a botched shirt launch losses of £4.6m for the current season look incredibly optimistic. That figure includes the Europa League windfall.

Once again the company has breached UEFA Financial Fair Play regulations however it’s highly unlikely that anyone at the SFA will have the bravery to apply the rules to the tribute act that has been pandered to at every turn since gaining membership in 2012.