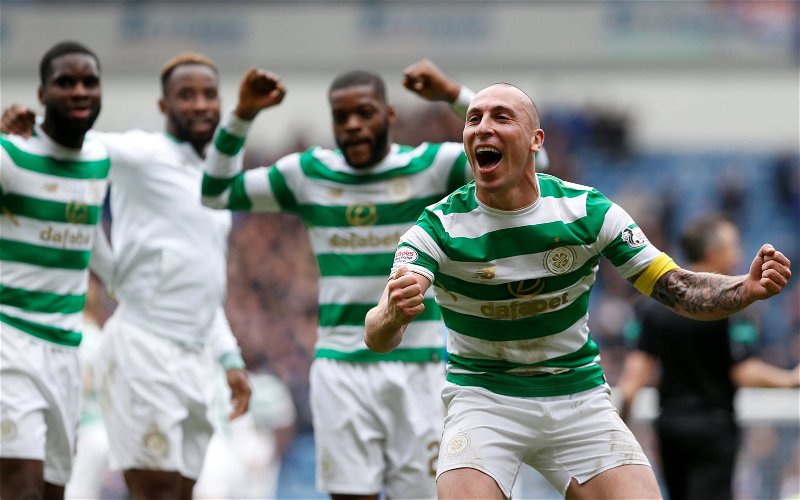 A year ago it was unthinkable but John Hartson expects to see a Celtic side without Scott Brown line up against Salzburg.

Twelve months ago a Celtic side without their skipper was always vulnerable with opponents taking advantage of a certain missing something in the hoops side.

Brown carried out the instructions from Brendan Rodgers to the letter, dictating the tempo of play and getting on with the less glamorous tasks that made the team tick.

Over the last two months Celtic have learned to live without their skipper. After trying out Youssouf Mulumbu and Eboue Kouassi the introduction of Ryan Christie has brought a new dynamic to the hoops play with everything clicking into place.

Wins over RB Leipzig and Rosenborg have left Celtic needing just a point from the clash with RB Salzburg on Thursday night with Hartson confident that can be achieved with Brown watching from the bench.

In the Evening Times the Welshman explained

Before he got injured, and I said as much in this column, I would have had Brown in my team for every big game. So, too, would the manager.

But I don’t think Brown will start against Salzburg on Thursday night, a game he was born to play in.

Had you asked me in October, I would have said that Rodgers would trust his captain even at 70 per cent for such a big night. A point for Celtic against Red Bull Salzburg, who of course have already won the group, keeps the club in European football until after Christmas for the second year in a row. It’s going to be a massive test.

However, I believe Brown, and Olivier Ntcham as well, will have to make do by being substitutes. And I am sure Brown will be fine with that

He is the ultimate professional and has as close a relationship with his manager than a captain at any club could wish for. He knows that at 33 he can’t play every game, although I’m sure he would want to.

And he’s wise enough to realise that Celtic are playing stylish winning football. The players who have started are in superb form, at the back and in terms of scoring goals.

For me, Rodgers won’t change the team for Salzburg – Kieran Tierney will obviously come back in – and I agree.

Brown will have plenty more big games for Celtic; however, right now I believe the manager will stick.

Kieran Tierney is expected to return from injury to take the place of Emilio Izaguirre in the Celtic defence.