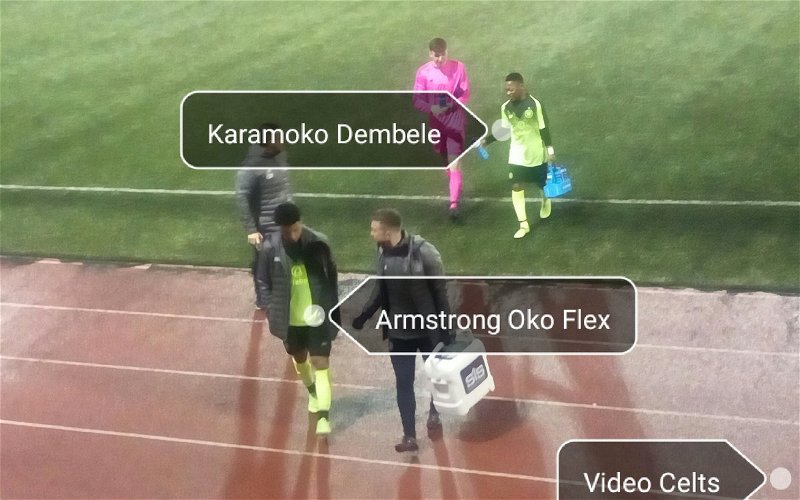 On Friday night I got my first look at the most hyped prospect to come through the Celtic Academy- he didn’t disappoint.

Keeping Karamoko Dembele a secret in the age of social media was mission impossible with fans across Europe and beyond aware of a very special talent.

In September 2016 he made a substitute appearance in the Development League that made him headline news and ensured that every subsequent move was duly recorded. Scotland and England have both capped the London born kid whose parents are from the Ivory Coast.

On Friday night under the drizzle of a pre-Christmas Lesser Hampden sky Dembele took another step on the path that is likely to see him make his first team Celtic debut before the season is over.

At the end of February he can sign a professional contract, there will be offers to instantly become a millionaire elsewhere but as his appearance in the Christmas video demonstrates the first steps in his professional career will be at Celtic.

Perched out on the right-wing of Tommy McIntyre’s side he didn’t see much of the ball in the first half of the Glasgow Cup tie against Queens Park but when he did have possession it was obvious that his talent is very real.

In the 15th minute he came in from the flank saw his shot blocked with Armstrong Oko-Flex netting with the rebound. Just before the interval the compliment was returned with Dembele rifling a 12 yard shot into the net with glee.

After the break Celtic struggled to add to their 4-0 advantage but the spectators were treated to some special touches from the 15-year-old.

With his low centre of gravity he can motor away from lunging defenders but is equally at home switching onto his left foot to cut inside and head for goal. Lots of skilful wingers fall apart in front of goal but Dembele looks to be just as composed when presented with a chance as he is when faced by a defender or two.

Queens Park weren’t overly rough on the Celtic winger but he stood up well to the challenges of opponents three or four years older. With ten minutes left to play he switched to the left wing where he was just as effective, setting up Wallace Duffy for Celtic’s fifth and final goal.

Brendan Rodgers is well aware and encouraged by the latest talent coming through the Academy, soon the first team manager will have the task of developing the talented teenager into the real deal at top team level.

It shouldn’t be too long before the name Dembele features again on the Celtic team sheet, it wouldn’t be the biggest shock if Karamoko makes as many headlines and memories as Moussa.