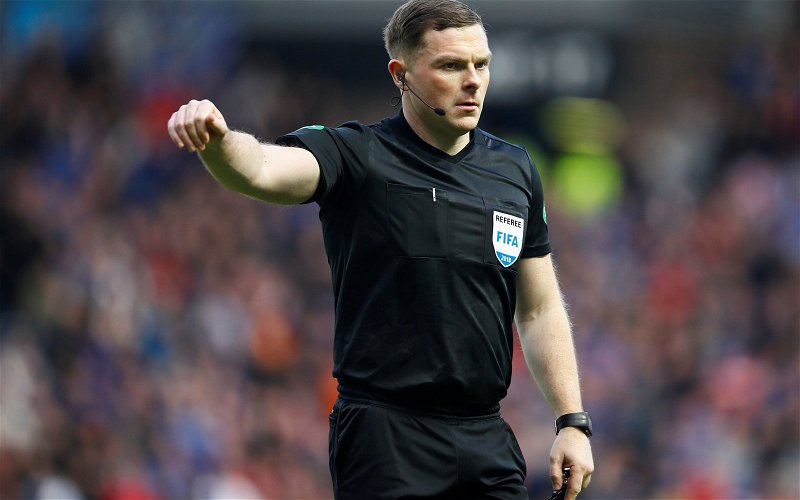 Pictures have emerged on twitter of John Beaton allegedly enjoying a celebratory drink in The Crown Bar in Bellshill.

The timing of the pictures are unclear but there has been claims that the leading referee was in that pub on Sunday night, apparently enjoying a great reception with close friends.

‘Man drinks in pub’ is hardly headline news but after his performance in Saturday’s Glasgow derby at Ibrox it does call into question the decision making of Beaton and the systems within the SFA used to train, promote and select match officials. 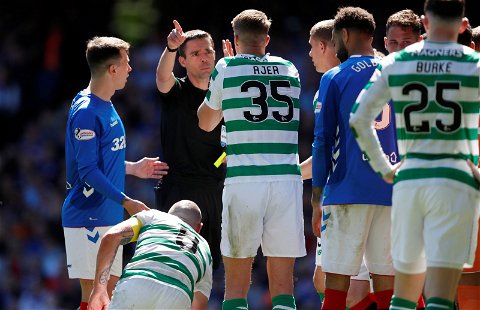 Brother Beaton after the game on Saturday ???????? pic.twitter.com/kw1Ds8bgww

In Scotland there are 12 geographical refereeing associations, at Ibrox three of the match officials were from the Lanarkshire Referees Association. The other was an extreme right-wing Tory MP from Moray.

By most accounts Beaton put in a horrendous performances at Ibrox, as bad as certain Celtic players. Those players are answerable to Brendan Rodgers and could be dropped, missing out on appearance money and bonuses. Beaton is accountable to no-one. Along with six other referees, three also from Lanarkshire, he is on the FIFA list and assured of regular well compensated foreign trips in the new year.

Celtic fans have long viewed Beaton suspiciously, he first came to attention in 2014 when he allowed an outrageous attack by Bilel Mohsni on the Albion Rovers goalkeeper to earn the Ibrox club a Scottish Cup replay in 2014.

There has been other incidents that raised concerns, all of them seeing decisions go in a predictable manner.

At Tynecastle in August 2016 he awarded Hearts a penalty against Celtic, knew that it was wrong and apologised to Brendan Rodgers at half time. Jamie Walker was later given a two match ban for simulation.

Later that season Joey Garner committed a waist high attack on Dougie Imrie of Hamilton during a Scottish Cup tie at Ibrox. No card was produced with Garner going on to score a hat-trick.

At the start of this season, again at Tynecastle Steven Naismith kicked out at the grounded Jonny Hayes then leaned over the Celtic winger to scream abuse at him. No action was taken against Naismith.

With no accountability or transparency match officials will come under scrutiny, the SFA should be publishing the referee’s match report and the report of the referee supervisor within two hours of the final whistle. That move could be pushed through by the member clubs but there seems to be no appetite among the members to make match officials accountable.