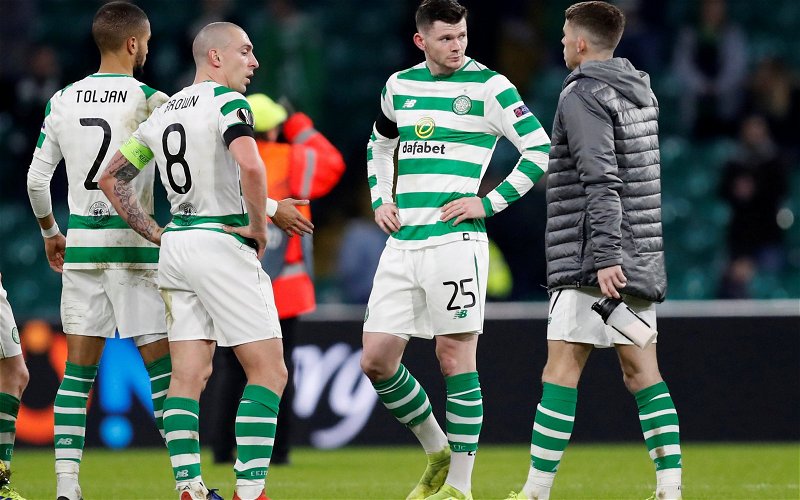 Oliver Burke is looking for Celtic to bounce back from the Europa League defeat from Valencia last week.

On Thursday the hoops visit the Spanish city for what most fans believe is a dead rubber- looking for an unlikely two goal win to progress to the last 16 of the Europa League.

There was a clear gulf between the two clubs last week as Valencia scored either side of half-time with the hoops unable to muster a worthwhile effort on goal.

After seven successive domestic wins the gap between Scottish and European football was fully exposed but the on-loan West Brom forward is looking forward to another tussle with the eighth best team in Spain.

““It was a really tough night, I was gutted, really,” he told The Sun about the first leg defeat. “Credit to them, they are a good side and they played very well but we can do much better. It was so disappointing, but we need to focus on the return and hopefully we can get a result.

“The quality is a lot better. They move the ball really well, their organisation is very good, they shifted us and moved us very well. They pressed us and their formation really worked.

“I’m sure we can improve, though. We showed signs we can penetrate and get in behind them. We created a couple of chances and hopefully this time we can get a bit closer and stick a few of them in the back of the net.”

Burke added: “We actually started the game really well and showed what we can do. I don’t know what happened after that, but there were a few things that suggested we can hurt them.

“We need to come together as a team. It’s definitely about pride. We have to go there and show we are capable and show what we can do.

“Fingers crossed we can get a result and see what happens. It was an amazing experience for me to play at Celtic Park in a big European game.

“It’s a privilege to be a Celtic player, with massive crowds and great fans. It’s a huge stage for me. I really enjoyed it — for a while.”

Burke was on the bench at Kilmarnock on Sunday but is likely to start Thursday’s return leg with Celtic desperate to find the first goal.

While Celtic’s approach is clear cut Valencia could be caught in two minds knowing that a draw is good enough to see them through, a result that they have achieved 14 times in 24 La Liga fixtures.