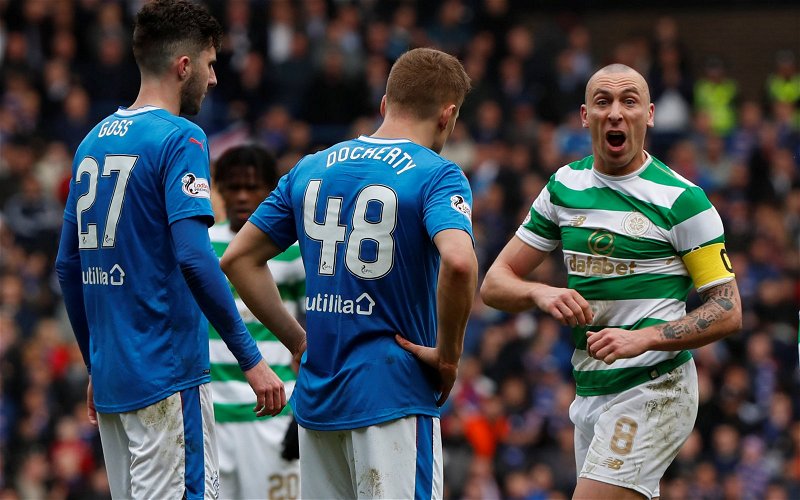 After four successive wins at Ibrox Scott Brown felt that cold all engulfing pain at the end of December.

Only one goal separated the two teams, Celtic remained at the top of the SPFL table but the celebrations and gloating all around won’t ever be forgotten.

Andy Halliday became a folk hero while Scott Arfield mimicked ‘the Broonie’ at the final whistle.

A journeyman that couldn’t get into the worst Scotland squad ever was having a go at the guy who had led his side to seven consecutive titles.

Arfield’s attitude and reaction will be in the spotlight on Sunday, if you want to mix it with the big boys you can’t do it selectively with Brown looking forward to the weekend rematch.

???? “There’s a lot of guys coming back to full fitness like Olivier Ntcham and Tom Rogic, how much of a boost is it to have them back ahead of Sunday’s game?”

Speaking to Celtic TV about the Ibrox defeat he admitted: “It will always hurt, especially as we went on a record-breaking run against them as well, 12 games undefeated.

“It was great for us to go on that run but it was always going to end eventually and just the way it ended we didn’t play that well at Ibrox and we know that ourselves.

“But we bounced back, we came back from Dubai and had a good wee mini pre-season under Brendan and the lads and it spurred us on for the last half of the season.”

After a well earned break as his team-mates went into international duty Brown will lead from the front foot on Sunday with Tom Rogic and Olivier Ntcham back in contention after injury.