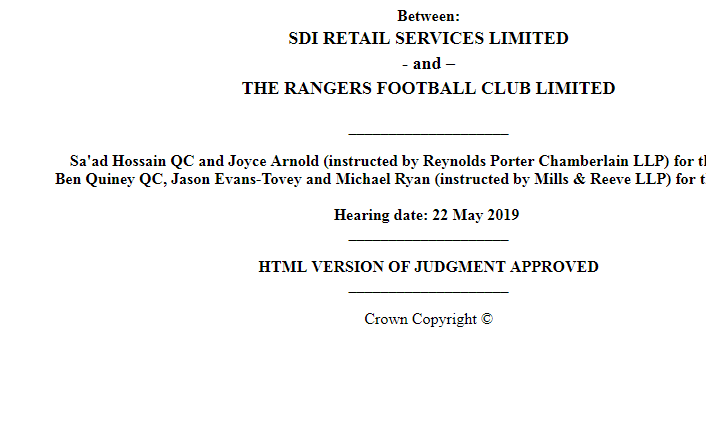 Dave King has scored another stunning defeat in his long running battle with Sports Direct.

Details of the most recent sitting on the case, on May 22 have been published on line with Mike Ashley’s firm winning on every point raised.

Although no compensation figure is mentioned the contract between Sports Direct and the troubled football club remains in place killing off a vital source of income.

Last July Sports Direct went to court in England after the club from Ibrox breached the ‘matching rights’ in the contract drawn up in June 2017 after they had paid £3m to get out of a seven year agreement.

Despite the on-going court case kit appeared for sale online in September with a store opening in Glasgow city centre in December.

The funds from those sources allowed the club to meet their biggest bill, the monthly payroll, but even so a further secured loan was required in February to keep the lights on until season ticket money started to arrive.

With the merchandise, retail and distribution contract standing up in court it seems certain that that source of income will be denied to the club this season which will severely curtail Steven Gerrard’s war chest.

Meanwhile the Daily Record has linked Gerrard with a £3m swoop for Anderlecht ace James Lawrence despite competition from Swansea and Stoke.