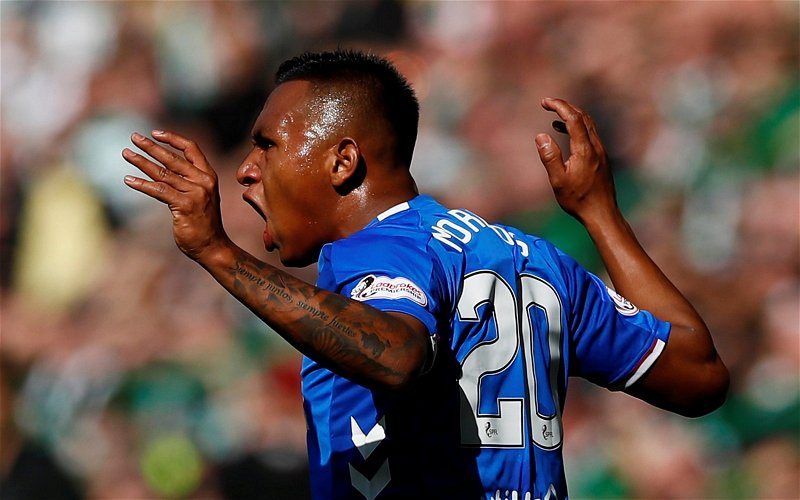 The Daily Record has continued with it’s Crystal Palace ‘in contact over Alfredo Morelos’ story by getting an official denial from Ibrox.

As Steven Gerrard confirmed last week while in Portugal hoping for a phone call from Derby County there hasn’t been any offers made for the former HJK Helsinki striker.

For over 18 months reports about reports about interest in Morelos have surfaced in the Scottish media without anything of substance anywhere else. A move to England can be discounted on work permit grounds with the 12th best striker in Columbia playing 80 minutes of international football in the last three years.

Undeterred it seems that ‘El Buffalo’ which is Colombian for red card, must be sold for around £20m since he is comparable to Moussa Dembele in the minds of the hard of thinking.

Twitter account Rincon Escoces has amassed 1,300 followers since 2013 as it translates stories about Scottish football into Spanish, now and then they’ll put two and two together with the inevitable result of 222.

Wee Alfredo between 3 and 4 million Sevco are skint will announce as undisclosed fee try to get a sell on 10 % he is a decent goal scorer against shit teams. Still never scored against Celtic. As Celtic fans we humiliate him by cheering him

Excitedly the Record ran with the story online yesterday, today their army of readers were given an update in among mentions of the value of Aaron Wan Bissaka and Wilfried Zaha.

Reports in Spain linked Roy Hodgson with a move for the 23-year-old who became the first Rangers frontman in a decade to bag 30 goals in a season last term.

Morelos has never hidden his desire to try his luck in England and Gers managing director Stewart Robertson claimed during a fans Q&A last season that the club would want a fee in the region of the £20 million Old Firm rivals Celtic banked from Moussa Dembele’s sale to Lyon.

But Ibrox insiders categorically denied claims that that Morelos’ US-based agent Michael Gorman had informed them of interest from Palace.

The source told Record Sport: “Stewart Robertson has had discussions with the representative of Alfredo Morelos, as he does on a regular basis, and Crystal Palace weren’t mentioned.”

Morelos will get the chance to shine in tomorrow’s glamour friendly against Oxford United, fans can pay at the gate.