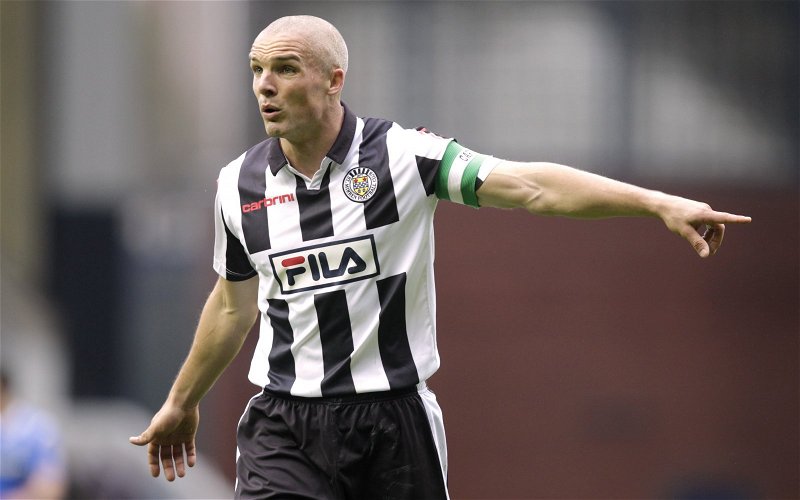 His hoops career only consisted of one match but in whatever company he keeps Jim Goodwin can always consider himself a former Celt.

A 2-0 win over Dundee United in May 2000 was highly significant for a number of reasons, it was the last time Kenny Dalglish took charge of Celtic while Henrik Larsson made his return from a broken leg ahead of Euro 2000 and a devastating season alongside Chris Sutton.

Among the names on the Celtic team-sheet was Jim Goodwin, alongside Brian McColligan, Ryan McCann, Mark Fotheringham and John Kennedy. The goals were scored by Simon Lynch and Mark Burchill, sitting alongside Larsson on the bench were John Covery, Liam Miller and Paul Shields.

That team quickly split up with their careers heading in many different directions, noting the arrival of O’Neill and big money signings Goodwin didn’t hang around, ditching the boyhood dreams and heading for Stockport and football at the coalface.

Scunthorpe and Huddersfield followed, he returned to Scotland in September 2010 but left for St Mirren a few months later where he achieved legendary status by captaining the 2013 League Cup winning side. Regular appearances on Sportscene, and discussions about red and yellow cards followed before he too the step down to Alloa Athletic as player/assistant coach in 2016.

After a couple of months assisting Jack Ross he was thrown in at the deep end when his boss moved to St Mirren, Goodwin took to it like a natural. A near miss at promotion in 2017 was followed by a play off win over Dumbarton 12 months later with the part-timers tipped for a quick relegation, mainly in the minds of supporters of other clubs.

Goodwin fancied the challenge, kept the club in touch on a shoestring then shook the division up with four wins on the bounce at the end of March and into April. Neighbours Falkirk were relegated with Queen of the South escaping the same fate in the play offs.

It seemed an open secret that Goodwin was bound to become manager of St Mirren, their play-off survival was almost overshadowed by Oran Kearney returning to Coleraine.

Goodwin didn’t jump at the job but eventually took it on, after losing a Betfred Cup shoot-out to East Kilbride then edging past Albion Rovers by the same means the new season looked ominous.

A fortnight ago Goodwin set out a team that beat Derek McInnes, with a fortnight to prepare he tackles Steven Gerrard today and has again had his side written off.

At 37 the boy from Waterford has time on his side to make it in management. He wasn’t handed a silver spoon but has one appearance for Celtic and one full cap for Ireland to his name.

McInnes won’t be the last boss to be shaken up by the guy currently in charge of St Mirren.