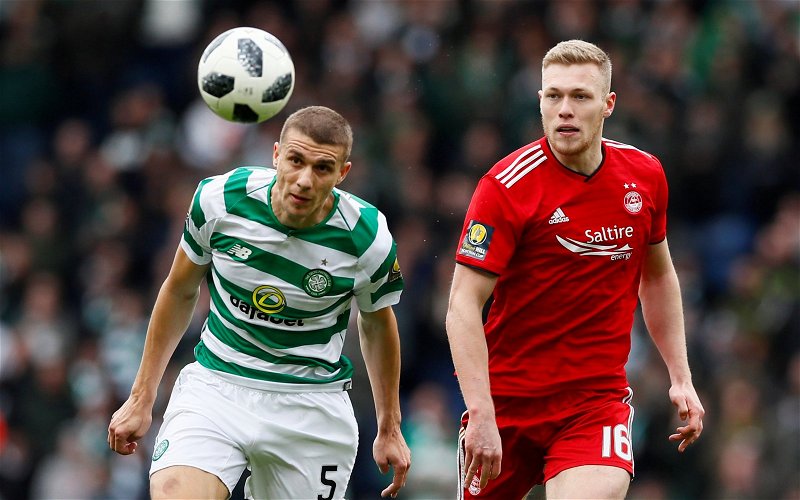 Willie Miller has questioned the decision making of Sam Cosgrove over his red card attack on Kris Ajer.

Aberdeen’s Greatest Ever Player watched the match for BBC Scotland and had a perfect view of the incident near the corner flag of the Main Stand.

Miller made a career out of putting in tackles as Alex Ferguson’s side enjoyed their greatest ever successes including the 1983 Cup Winners Cup.

A backline that included Miller, Alex McLeish and Doug Rougvie knew when to deliver a telling tackle- unlike Cosgrove who let the red mist descend as he eyes up a bone-jarring attack on Ajer.

In the Evening Express Miller explains:

The difficulty comes when you know the player has won the ball but there is also an argument of excessive force and speed in the tackle. If you go into those type of challenges the referee has a huge decision to make because in these occasions they have been instructed to show the red card.

So if a player goes into a challenge like that he or she is liable to be shown a red. The minute you make your mind up to go into that type of challenge and take the ball and the player as well it is one where referees have been instructed to stamp out of the game by showing red cards.

Players have now got to take that into consideration. There is also the fact that Kristoffer Ajer was going out towards the corner flag so Cosgrove’s challenge was not a crucial one. The Aberdeen striker did not have to go in there to make the tackle.

Cosgrove is automatically suspended for Thursday’s match against Livingston, so far at 12 noon on Monday there has been no word of an appeal from Aberdeen.

Fortunately Ajer anticipated the ‘challenge’ and took evasive action to avoid the full force of the high-speed attack from the Aberdeen striker.