Deluded Brendan is given a Klopp of reality but he did give Trent Alexander Arnold his debut! 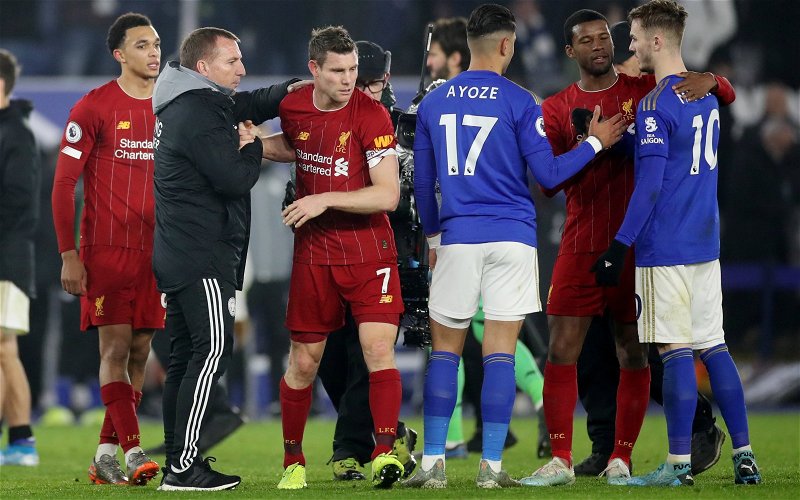 Brendan Rodgers suffered a Champions League type hammering last night as Liverpool handed out a 4-0 lesson to his exciting young Leicester City side.

Since the start of the season the former Swansea and Reading boss has been charming the English media just as the remnants of Claude Puel’s side have been riding high in the EPL.

Kasper Schmeichel and Jamie Vardy have been the driving force but a 3-1 defeat at Manchester City provided their management team with a reminder that trophies are decided on the pitch rather than charm offensives.

Pep Guardiola gave Rodgers a friendly hug after that defeat but there was a much bolder and firmer lesson handed out last night as Jurgen Klopp’s side dished out a 4-0 hammering in front of the happy-clappy fans at the K Power Stadium.

“Because of how well we’ve done, we’ve been catapulted into this race for the title. But I think you’ve seen over the last couple of games, the quality of the opposition we’re playing.

“Liverpool were absolutely terrific. We can be better, much better. With the ball, we gave it up too easily this evening. When we got into the opposition’s half we didn’t keep it for long enough, so you’re then inviting that pressure.

“My young players and the team have been fantastic up to this point, but obviously it’s taken the shine off it the last couple of games.”

It might’ve been 4 years since I left but I’ve finally come through on my promise to1 deliver Liverpool a Premier League title.

It’s all about the long game. #ThanksBrendan

Trent Alexander-Arnold has come a long way since I gave him his debut v Swindon in 2015.

He owes it all to me I hope he’s grateful.

I created a world class player in Roberto Firmino.

Signed as a full back he’s turned into a deadly striker.

Now I know how Frankenstein felt when he created his monster.