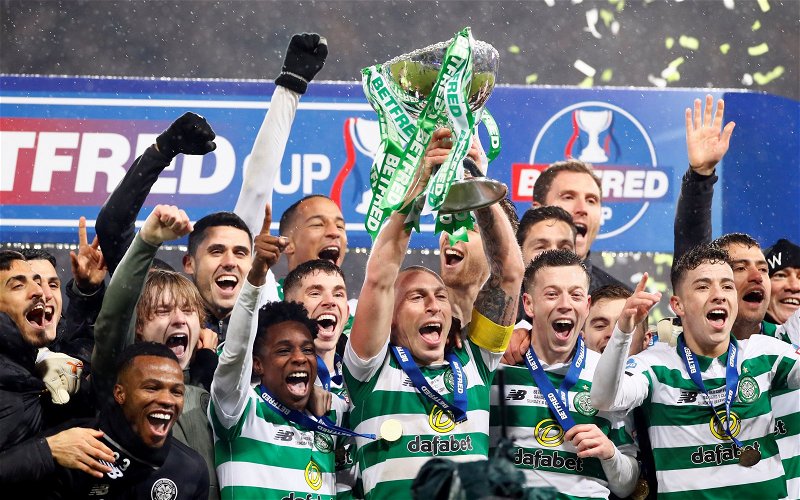 Neil Lennon has set the record straight over the apparent Travesty of Justice at the League Cup Final earlier this month.

A goal from Chris Jullien, a penalty save by Fraser Forster and the sending off of Jeremie Frimpong were some of the talking points along with Alfredo Morelos missing half a dozen decent chances.

Since Celtic lifted the trophy at Hampden the match has been portrayed as a smash and grab with Steven Gerrard’s side denied their first piece of silverware due to circumstances outwith their control.

For every video clip that claims to show Jullien offside at the goal there is another showing him onside, at the match there wasn’t a single claim from the Ibrox players about the decision to let the goal stand.

Apart from the penalty Mikey Johnston missed the best chance of the match with Fraser Forster outdoing fellow loanee Jermain Defoe who came on as a substitute and barely got a touch of the ball.

Celtic survived 27 minutes plus stoppage time down to 10 men while Morelos and Scott Arfield avoided red cards for brutal fouls on Jullien and Ryan Christie.

Lennon has listened to the story grow arms and legs over the last three weeks but gave his version at today’s media conference to preview Sunday’s Glasgow derby.

Is there a lot that you can learn from the cup final, not being at your best and still winning?

A lot has been made of it (not being at their best). You have to remember that we didn’t have a centre forward, a fit centre forward, it’s pretty important in the game. And we had Boli out and Greg Taylor suspended (cup tied) for the cup final so I had to rejig things with Jonny as well. And they (the team) still came through and they were down to 10 men. So many would say that we didn’t play at our best and that’s a fair assessment but we still won.

People will talk about the cup final but they don’t talk about the performance at Ibrox where we were totally dominant and won the game comfortably. We look forward to it, we will be as strong as we possibly can and we’ll take it from there.

In four Glasgow derbies since returning to Celtic as manager in February Lennon has won three and lost once, the dead rubber at Ibrox in May after the title had been won.