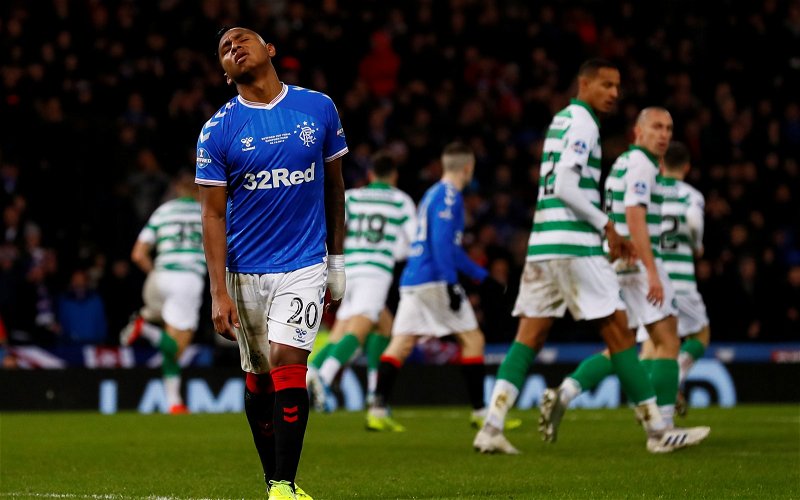 One Celtic fan has started off  the extensive task of cataloguing transfer interest in Alfredo Morelos.

Six months after signing from HJK Helsinki in a £1m move the hysteria started with claims of interest from a mystery club in China. When BBC reporter Kheredine Idesanne decided to use his tennis contacts to check out reported interest he found no interest. Soon afterwards the BBC had to publish a retraction setting in place the pattern for transfer interest in the striker.

Soon after Steven Gerrard took charge at Ibrox £2m was raised from the sale of Josh Windass but other than that there has been sign of the sort of bids that Celtic received for Moussa Dembele and Kieran Tierney.

A succession of sources has revealed details of interest in the striker but after the final match of last season Gerrard admitted that the only enquiry he was aware of was for 3 million euros.

Kris Boyd on Sky Sports wondering where the story on Morelos going to China came from! ???? https://t.co/ZPZpcw8C9o

Steven Gerrard says there have been no bids for Rangers’ Alfredo Morelos despite reports of a £30m contract offer in China.https://t.co/4kv7LbRNj4 pic.twitter.com/0vSFnuKKyb

Morelos has been able to cash in with two contract extensions since his 2017 move to Scotland but he is still believed to be lagging way behind Jermain Defoe in terms of wages.

With another red card picked up at the weekend against Motherwell and his continuing failure to score against Celtic it’s unlikely that there will be any £20m plus bids coming in next month with a Stuart Armstrong type offer in the region of £8m far more plausible.