The striker made two tweets around 6pm tonight as speculation mounts that he is on his way out of Celtic then closed his account which had almost half a million followers.

Patryk Kimala signed a four and a half year contract earlier this afternoon which appears to have knocked Griffiths down to third choice for one striking place in Neil Lennon’s side.

Griffiths liked a tweet suggesting that him or Vakoun Bayo would be moving on followed soon after by a GIF that could have been read in various ways. 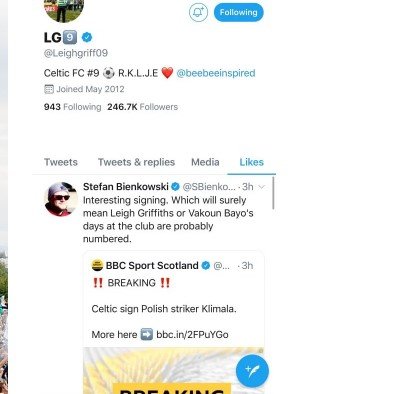 Griffiths scored three times for Celtic in the early weeks of the season but hasn’t netted since equalising away to Motherwell at the start of August.

Various injury problems have kept him out of contention although he did start the Europa League tie away to Cluj last month and made a number of short substitute appearances.

The striker has made various social media posts about returning to action but deciding to close his Twitter account is an unexpected move.