Why two Celtic players have extra motivation for Aberdeen chief 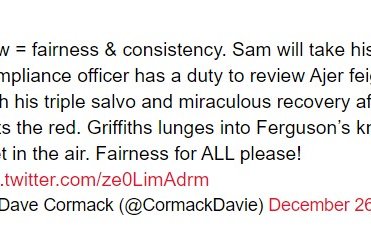 Leigh Griffiths and Kris Ajer won’t be short of motivation for Sunday’s match against Aberdeen.

Sitting in the Main Stand at Pittodrie will be new chairman Dave Cormack who had plenty to say about the Celtic duo when he took to twitter in the early hours of December 26.

Five days earlier Celtic had beaten the Dons in Glasgow with Sam Cosgrove losing the plot soon after Odsonne Edouard had restored Celtic’s lead. Cormack kept his tweet in place for over a week before reaching for the delete button.

It’s absolutely embarrassing. I’m not having that at all. Kris Ajer is the victim in this, he was on the end of a very heavy challenge. There was no feigning injury, there was no play acting.

Kris Ajer is a model professional and I’m not having somebody from the Aberdeen board – or anyone else – talking about my players like that. First of all it’s not true, it’s a lie, and second of all these things should be kept in-house.

We’ve been very balanced on the issue, we’ve tried to play it down, but when you see comments like that coming from the chairman of Aberdeen we’re not tolerating it as a club and I’m certainly not as a manager.

He’s a player I think every club in this country would want in their team, he’s a model professional on and off the field and I think it’s very naive from Mr Cormack. It’s an attack on my player and he’s done absolutely nothing wrong, absolutely nothing. The comments are absolutely disgraceful.

No apology was offered to the Celtic players from Cormack.

On the park the new man in the chair at Pittodrie has got plenty to occupy himself with as Aberdeen scrap it out with Motherwell and Livingston for third place in the SPFL Premiership.

Curtis Main’s opener against Hamilton was the Dons’ first league goal of 2020. In their two home SPFL Premiership matches this year Aberdeen have lost 1-0 to Motherwell and St Johnstone.