Woops! Celtic Twitter gets their Odsonne and Edouard’s mixed up!

Even Celtic’s Twitter feed is struggling to keep up with Odsonne Edouard!

With goals flowing freely at Celtic this season it can be hard to keep up with comparisons also being made between Edouard and Moussa Dembele.

Leigh Griffiths has given Neil Lennon the option of a two-pronged strike force, covering this morning’s media conference led to some confusion for the hoops Twitter account. 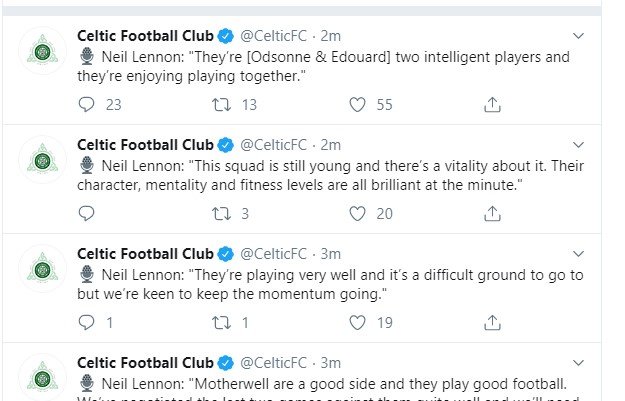 Griffiths and Edouard are expected to lead the line at Motherwelll tomorrow night as Celtic look for their sixth successive win of 2020.

Four back-to-back wins in the SPFL Premiership has stretched the gap at the top to seven points as the hoops bounce back from their defeat in the Glasgow derby.

Across the city Steven Gerrard seems to be feeling the pressure as the credibility of his squad and their title credentials are coming in for scrutiny with every point dropped.