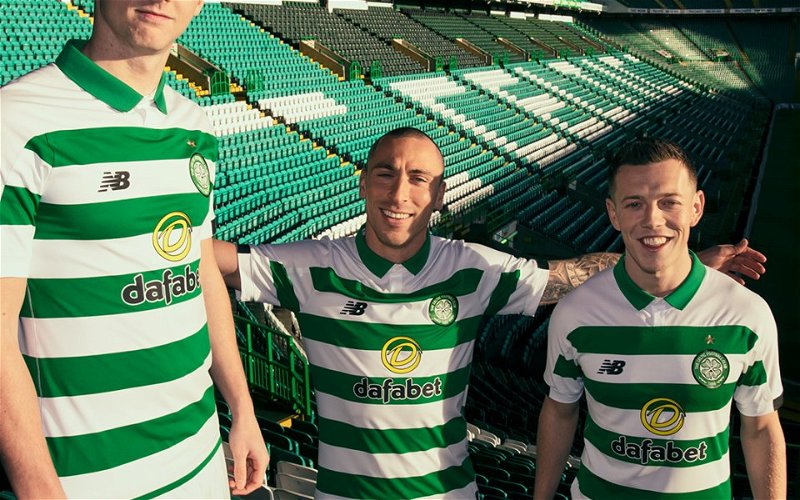 Delving into the archives and giving a retro kit an Adidas makeover seems to be popular with a mainly white top from the early eighties getting rave reviews across Twitter.

Keeping things plain and simple with three added iconic stripes seems to be all that is required to capture the attention of the Celtic support.

The five year contract with New Balance expires at the end of this season with almost every Celtic fan on Twitter expecting Adidas to be next in line to produce and market the hoops- plus two change kits and numerous items of training kit.

One issue that some fans have highlighted is the fact that a mainly white top isn’t unlike the hoops which is 50% white.

Yellow, amber and gold have been the regular change colours in recent seasons with two pink kits making little impact with supporters.

New Balance are unlikely to be fondly remembered for their kits but they did bring a sense of occasion to the kit launch by making them open to fans.

Making a big splash on social media seems to be the modern way with the home kit released in late May followed by an away kit before the school summer holidays in July.

Any idea when Adidas will be announced, anyone?

Nice that one. Only thing is we tend not to wear a white away shirt very often. Which is a shame as last seasons was one of the nicest shirts in a long while.

I’m buying them all lol

If Adidas produced the strips shown on Twitter recently, can you imagine how many strips would be sold.

If @adidas make oor kits al be buyin every yin they bring oot ? ?

Thats tremendous.. has the deal been done yet ????