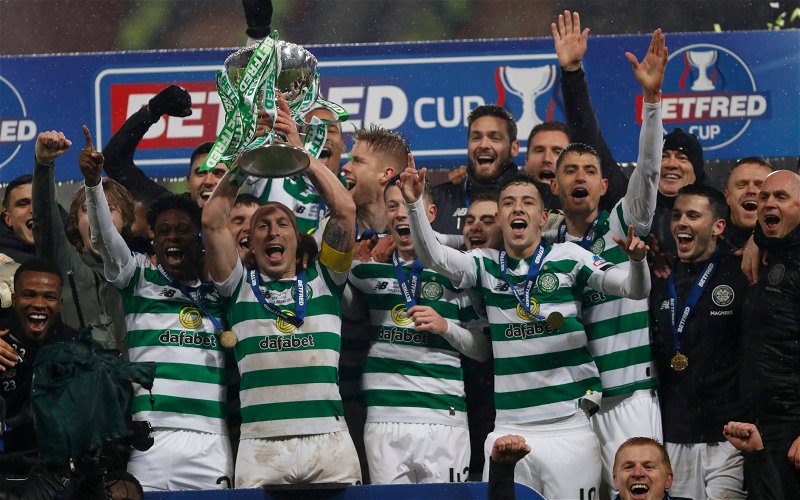 Chris McLaughlin believes that next season’s League Cup could go ahead as a straight knock-out competition.

Over the last few seasons all of the SPFL clubs not playing in UEFA competitions have been drawn in groups of five, with a north south split, giving clubs four matches in July over a 15 day period.

Twelve clubs have joined the four teams involved in European competitions for a knock out with Celtic winning the last four competitions with just four matches involved.

Next season Neil Lennon’s side will be looking to match the record of Jock Stein’s team in winning the trophy five times running but there are likely to be significant changes to the tournament.

On the BBC Scotland podcast (12 min 30 seconds) McLaughlin spoke with Liam McLeod about what next season might look like.

C McL: I will tell you what will give, the League Cup. There’s no chance that is going to happen.

L McL: Will it be cancelled altogether or will they just scrap the group stage and truncate the competition?

C McL: I think that there is more chance of the latter, of scrapping the group stages but, the League Cup, and Neil Doncaster was saying that they are trying to get that going I think that privately they know that that is very, very unlikely.

What they are doing and what Chief Executives and Chairmen, MDs and secretaries across Scottish football are doing right now is sitting trying to figure out what is best to do. Whether that is their finances, what to do with a youth programme or how you construct a cup competition. All bets are off here, there is absolutely no doubt about that.

The Scottish Cup, the SFA have said for a long time that they are determined to see the Scottish Cup played to a finish and you can understand that.

By the middle of June there will be little more than a handful of players under contract to each club in the three lower divisions. Today Dunfermline released all 17 players that are out of contract.

Getting all clubs ready for the league campaign on August 1 is the priority with teams going into the new season with smaller squads looking to survive firstly before plotting runs deep into cup competitions.

During the podcast Peterhead manager Jim McInally revealed that his club has four players under contract, he thinks that the whole of 2020/21 could be scrapped for League One and Two rather than play matches Behind Closed Doors.