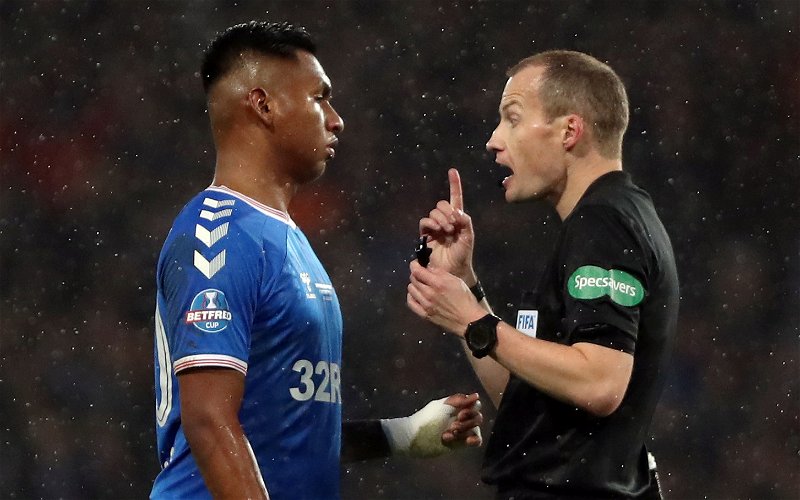 With zero interest in a striker that was red carded seven times in 18 months- and who has one goal to his name in 2020- attention is turning to fantasy bids for an Alfredo Morelos replacement.

Every transfer window since the striker was signed by Pedro Caixinha has been dominated by news over clubs ‘expressing an interest’, ‘keeping tabs’ or ‘lining up a bid’.

Over the last three seasons a total of £2m has been brought in to Ibrox in transfer fees, they have looked across the city in envy at the £20m received for Moussa Dembele and £25m from the transfer of Kieran Tierney.

There is no interest in Morelos. Attempts have been made to stir clubs in China and Qatar have failed, across Europe his red card tally is better known than his 12 SPFL goals in the season just ended, the same amount as Hibs striker Chris Doidge.

Taking up a new ‘Alfie in Demand’ angle, The Sun reports:

RANGERS are set to reignite their interest in Kemar Roofe if star striker Alfredo Morelos leaves Ibrox this summer.

Steven Gerrard missed out on the English striker when he moved from Leeds United to Anderlecht 12 months ago for £7million.

But the Rangers boss is gearing up to make a second attempt to land the 27-year-old should top scorer Morelos move on.

The Colombian is being tracked by a host of English and European clubs while Qatar outfit Al-Duhail have also been linked with a £15m swoop.

Should Gers lose fans’ favourite Morelos in this transfer window, SunSport understands they will explore the possibility of tempting Roofe to Glasgow.

Morelos’ only goal in 2020 was away to Hamilton Accies in a 4-1 victory. He missed matches due to suspensions from the SFA and UEFA, he was also banned by his club from the Scottish Cup defeat from Hearts after returning late from compassionate leave in Colombia.