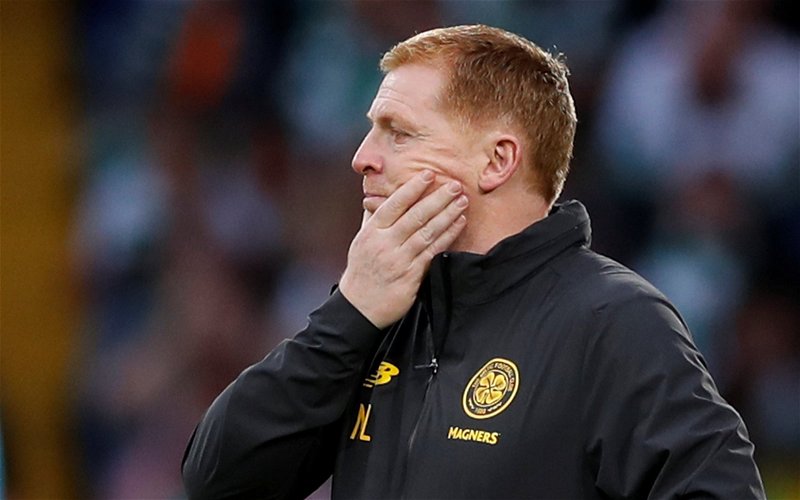 Neil Lennon was as baffled as the armchair Celtic fans when Odsonne Edouard’s early strike against Nice was disallowed for offside.

Celtic came flying out the traps 131 days after beating St Mirren in March and looked to get off to a dream start when their French striker tucked the ball into the net.

Ryan Christie was making his way towards the penalty box when a Nice defender nicked the ball away from the midfielder. It fell perfectly to Edouard who side-stepped the goal keeper then slipped the ball into the net.

There seemed nothing wrong with the strike, there was no appeal against it but after more than two minutes the referee was informed that the ‘goal; was to be disallowed.

? “Considering we hadn’t played in almost 5 months – technically, physically, tactically – we were really on it tonight.”

Neil Lennon praises his #CelticFC side after tonight’s return to action in Lyon. #NICCEL pic.twitter.com/NocoBDf7aa

Even with VAR I’m still not convinced that it’s the right decision. He’s saying it sort of deflected, I thought that it was a challenge from the Nice player that put Odsonne in. It was just the culmination of a really great start from us, we looked really threatening, with a bit more care in the final third, which will come, we carved out some great openings and looked really strong on the counter attack and Ryan (Christie) had a great chance with the one-on-one.

Lennon changed his entire team on the hour mark with Patryk Klimala taking advantage of hesitancy by the Nice keeper to grab a 73rd minute winner.

On Saturday Celtic play hosts Lyon before heading to the capital to take on Paris Saint Germain on Tuesday.

Odsonne Édouard rounds the Nice keeper and finishes it off with great composure, but it’s eventually disallowed by VAR for offside ?

A strong Celtic start, but they’ll have to wait a little longer for an opener yet ? pic.twitter.com/E8DT65UYz6