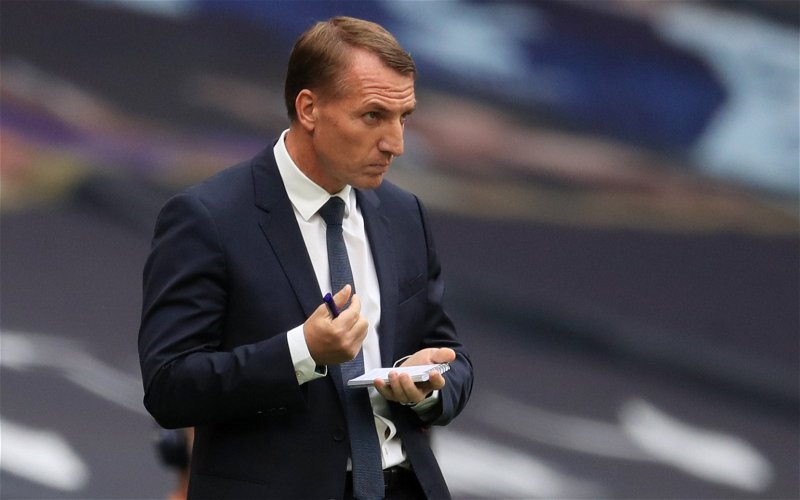 Leicester’s year of misery continued yesterday with a 3-0 defeat at Spurs to leave their Champions League hopes hanging by a thread.

After being shown up once again Leicester fans are getting wise to the numerous shortcomings of Brendan Rodgers who may be able to present an incredibly smooth image to the media but whose credibility in the dressing room is hitting the floor.

Jose Mourinho and Harry Kane had Rodgers’ number with Spurs 3-0 up before half-time with the Leicester defence cruelly taken apart.

The defeat leaves Leicester level on points and goal difference with Manchester United who have a game in hand. Ole Gunar Solskjaer take on West Ham on Wednesday before they face Leicester on Sunday in a match that will decide which club takes up the final Champions League place.

Going into Christmas Leicester were being considered as title challengers to Liverpool but with just five wins from 17 matches since the turn of the year it’s looking like Thursday night Europa League action next season for the manager who signed a new contract in December.

“That individual quality hurt us today.”

I’m concerned at a lot of the comments in there. Our shape caused our own downfall, not problems for Spurs. At least he acknowledges there’s a problem in dealing with counter attacks, but I expected to hear something a bit more damning, we were tonked….again. #lcfc #TOTLEI

Is it coaching, ability, attitude or mentality that has seen us blow a 14 point lead, must be looked at,then choices made, we need a big influx of starting first team players, let the likes of Mendy and Gray go. Huge transfer window and will decide where we want to be as a club

Tottenham did a Leicester on us, we were shit, simple.

Playing a high-line back 3, with players not known for their pace, against a counterattacking Mourinho side is what hurt us today

I remember when Brendan couldn’t guide LFC to the title with the most potent attack we’ve ever had mainly in Suarez…. but seeing Leicester bottle top 4 from being our only challengers at DEC. Is really quite impressive!… I think it was harder to do that tbh WOW

he is a genius