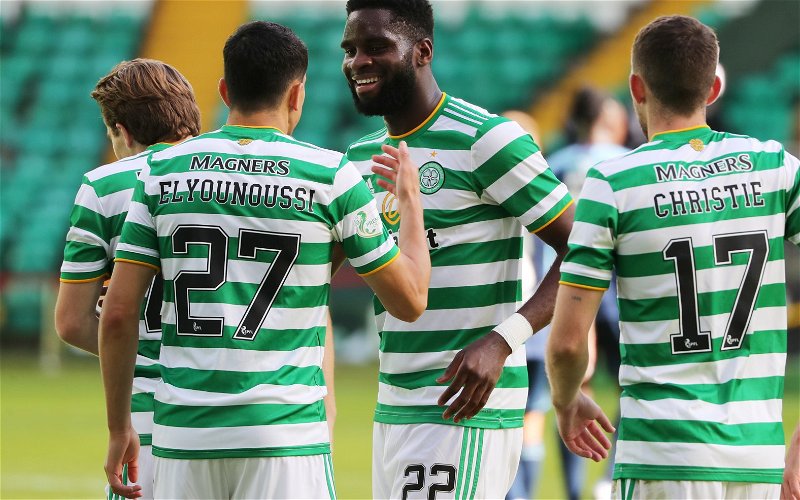 Frank McAvennie has back tracked on his criticism of Odsonne Edouard after the striker’s hat-trick against Hamilton Accies.

A week ago after watching the pre-season friendly against Ross County the former West Ham striker claimed that the Frenchman looked uninterested.

That was a clear nod towards speculation that Edouard was wanted elsewhere with regular reports linking Arsenal and Leicester with a move for the Celtic striker.

Edouard doesn’t give many media interviews but clearly follows what is being said about his performances, last night in perfect English he drove a coach and horses through the opinion of McAvennie.

He came out and had a wee bit of fun with me. I saw it this morning and just liked it. I’ve not got a problem with that.

Listen, the boys like Scotty Brown all know me. I didn’t mean anything by it. They’ll be having a good laugh about it in the dressing room but I didn’t say he wasn’t interested in playing for Celtic, I never said he wants to move.

All I said was he didn’t look interested in that specific game against Ross County with nothing to play for in an empty stadium.

It was all about fitness. That’s basically all I was saying. It wasn’t a slant on Eddie that’s for sure but who am I to talk about pre-season friendlies because I never won one!

He’s a big game player and I’m delighted that he came out and scored a hat-trick. It was brilliant, he should have scored four!

Edouard has already won more medals with Celtic than McAvennie did during two stints at the club. Like McAvennie did in 1988 to Dundee United, Edouard scored twice against Hearts in 2019 to turn around the Scottish Cup Final, securing the Treble.