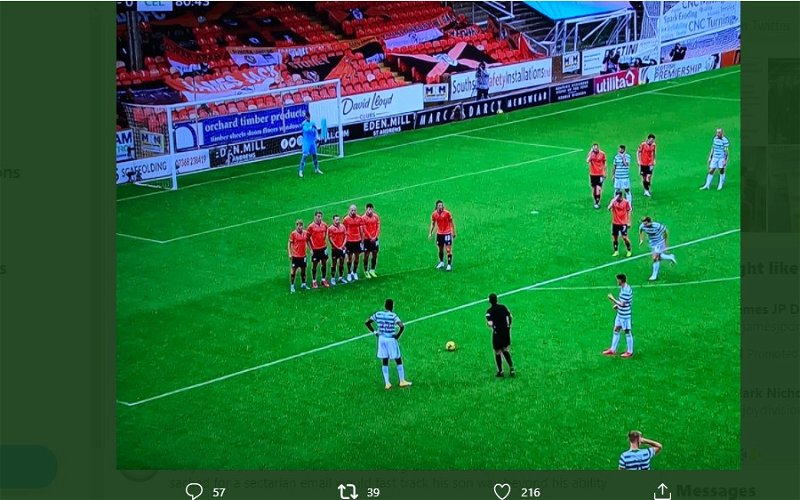 BBC Scotland have pulled up Hugh Dallas to justify the two first half penalties awarded to Steven Gerrard’s side at Motherwell yesterday.

Both awards fell under the dubious category or new ruling but when it came to traditional issues like fouling players in the penalty box the East Kilbride official didn’t want to know. Those incidents came at the other end of the park.

The award of those penalties floored Motherwell in the same way as their players were grounded when they attempted to get back in the game.

Michael Stewart was critical of Madden on Sportscene last night but rather than upset anyone inside Ibrox Dallas was called on to justify the decision.

Last month his son Andrew had a horrendous game when Celtic visited Dundee United with Odsonne Edouard booted without protection, Hugh’s boy struggled to measure 10 yards for a free kick and failed to add on two minutes of stoppage time for treatment to the Celtic striker. Typically, no United players were booked before the 80th minute.

Picking up on the BBC interview within an hour of Sportsound ending the Daily Record reports:

Speaking to BBC Sportsound, he said: “I can understand from player and coaches’ point of view they don’t like it. No one likes change, whether change is for the better, and normally it should be.

“At the end of the day, the arm was higher than it was when it struck the players hand. I think Michael Stewart said (on Sunday night) he tried to get his hand out of the way, and by doing that he stopped the ball from going beyond him.

With Douglas Ross on the line on Sunday against Ross County and Ayrshire ref Greg Aitken in charge there shouldn’t be any problems in that fixture.