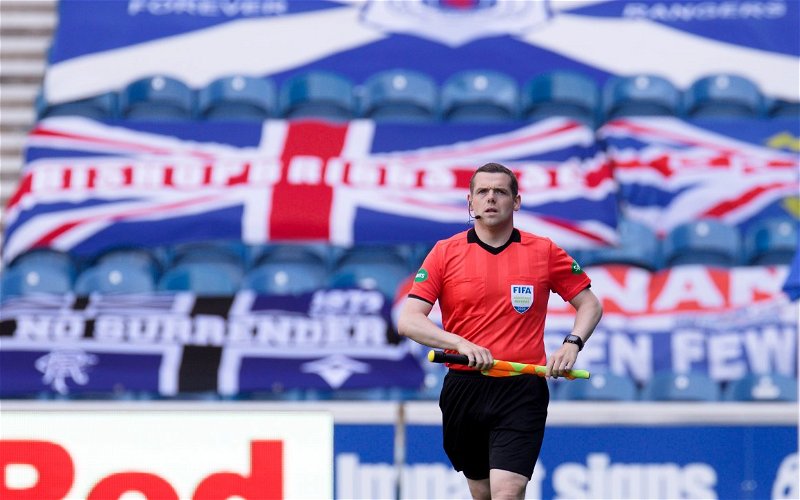 Douglas Ross has given The Sun a heart-breaking interview detailing the criticism that he takes from fans as an assistant referee.

The interview comes in-between consecutive appointments at Celtic matches which would suggest that he has favoured status with the SFA.

Ross has been on the line for four of Celtic’s last nine visits to Ibrox including the December 2018 fixture in which Alfredo Morelos appeared to have licence to lash out at Celtic players without any punishment.

Earlier that year he had screamed RED CARD, RED CARD at Willie Collum following a collision between the Colombian starlet and Jozo Simunovic.

The Scottish Tories have recently appointed Russell Findlay to manage their communications. As a former reporter at the Daily Record and The Sun Findlay knows the buttons to press to portray the extreme right-wing Tory leader in the best possible light.

He was filmed repeatedly shouting “red card” at referee Willie Collum during the clash at Ibrox in 2018.

He said: “What I find is that it’s more during the warm up because you can hear the really personal comments a bit more then. During an actual match you’ve got your earpiece in and there’s the noise of the crowd.

“Before I always do a bit of running and stretching at the perimeter and that’s when they really have a go at me. They bring up ‘red card’, my politics, my parentage, the fact that I can’t have a mother and father and have been born in wedlock because I’m a Tory in Scotland.

“All of that comes up. A lot of it is in good nature, there’s a bit of it not so much but you take the rough with the smooth. I do get Brexit comments, that comes in quite a bit.

“The fact that I’m the only one that mixes being a politician and an assistant referee at the highest level tells you it’s not a common path that politicians would take. It certainly doesn’t make you much more popular.”

As well as a match fee of £450 for waving his flag Ross will pick up generous mileage expenses for the 400 mile round trip to Glasgow. With regular weekend appointments in Glasgow and Edinburgh Ross can also push his political ambitions while on the road.