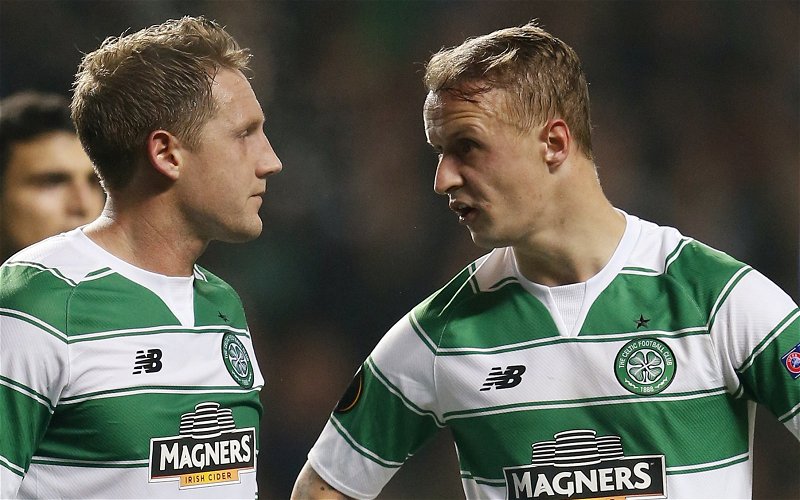 Leigh Griffiths has told the Celtic snipers that they’ll never break the spirit in the hoops squad.

When the striker joined Celtic in January 2014 Kris Commons would join him in the huddle as Neil Lennon’s squad claimed a third title.

These days Commons is very much on his own as he delivers a string of increasingly desperate attacks on his former club, manager and team-mates.

Shane Duffy was described as a bomb-scare in a Daily Mail column that was quickly picked up and repeated by other publishers.

Griffiths has developed a thick skin during his time at Celtic and told the Daily Record exactly what he thinks of the critics predicting doom this season:

Listen, we don’t take any notice of what pundits or ex-players want to say about us. They just want to stay in jobs, they want to give their 50 pence worth. But we don’t listen to them.

We know what we’ve got, we know the squad and backroom staff we’ve got. We’re all fighting for the same cause, so anybody wants to disrupt us, well they can try and try and try. It’s not going to affect us.

We’re a great squad and a tight knit group. Everybody plays for the badge, everybody’s fighting for the same cause. It would be very good for us to get a final. Ex-players and pundits who want to have a pop at us can say what they want and claim that we’re in a crisis.

Tomorrow Griffiths will be looking to play his part in beating Aberdeen to book a Scottish Cup Final place against Hearts.

He won’t need any extra motivation but after watching Hibs lose to their Edinburgh rivals today the life-long Hibbee won’t be wanting to see the trophy leave Celtic Park for Gorgie.