Neil Lennon has one more big decision to make for his side against Aberdeen on Sunday.

Discussions will rage about the striker- one or two, or who- can Scott Brown play in back-to-back big matches and now who plays in goals.

Losing Fraser Forster created a huge void complicated by Craig Gordon opting to move back to Hearts and denying Lennon a very reliable back up keeper. Scott Bain remained from last season’s trio of keepers but his stock had crashed, unfairly to this fan, after the 3-2 Champions League defeat from Cluj.

It emerged that the former Dundee keeper had a hand injury, whether he played in that match with the knock was never established. Gordon and then Forster came in but after their exits Celtic splashed out £4m on Vasilis Barkas which isn’t the sort of fee that they spend on back -up.

With the defence constantly changing and confidence dropping Barkas has had a tough start to life at Celtic without really having a howler on his Charge Sheet. Bain took over from the injured Greek against Aberdeen, he held his place in Lille last night with Barkas restored to the bench.

After his penalty save and sound positioning it now looks like the former Dundee keeper is the man in possession as The Sun reported.

Asked if he’s now got a claim for the jersey, Lennon said: “Absolutely, yeah. Scott was always in and around it anyway. He’s trained well and the time between coming back in June. I think there has been a real sea change in his attitude to his work.

He’s in the gym very early in the morning and he’s reaping the benefits of that. We put a lot of trust in him and faith as we do in Barkas as well, but Scott has done his chances no harm with another big performance. When you go away in Europe, you need your goalkeeper to play well and he stood up. He can be pleased with himself as we are

Who should be in goals against Aberdeen at Hampden?

Scott Bain, the man in possession keeps his place 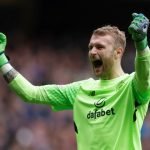 Vasilis Barkas, has did little wrong, at £4m he plays 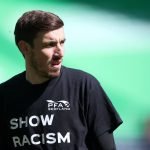 Having two quality keepers is the aim for every manager, on Sunday at Hampden Lennon will reveal his current Number One.