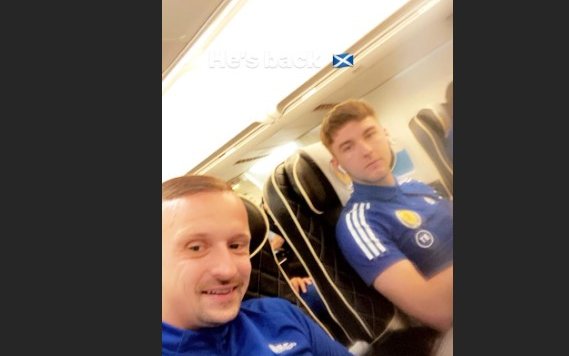 Celtic might have cause for concern tonight after Leigh Griffiths shared an image from the Scotland flight to Serbia.

The striker appears to be sitting less than 2 metres apart from Kieran Tierney for the 1,000 mile flight between Edinburgh and Belgrade.

During the last International break Ryan Christie was forced to self-isolate after being deemed to have been in close contact with Stuart Armstrong who had posted positive.

Christie and Celtic insisted that the proper social distancing had been maintained while they used separate Play Station 4 consuls. Tierney was also involved in the game with Arsenal getting clearance to play the defender while Celtic were unable to use Christie.

Neil Lennon was far from happy with the situation which came down to a telephone call with Armstrong being used against the word of Christie who insisted that he had socially distanced and had followed protocols since returning to training in June.

The Celtic boss told The Herald:

Arsenal have been given permission for Kieran to be in their squad so we are rightly confused. We want answers to some questions and I am sure our supporters will be the same.

You can’t have one allowed to play and one not, so we are confused as to how this has come about. All our preparations are pretty much done. We just need to assess a couple of players.

If we can get the all-clear for Ryan we would bring him into the squad. He probably wouldn’t start obviously but I’d rather have him available than not. He has tested negative twice now. He has no symptoms and has been training on a treadmill provided to him by the club. There is no reason why he can’t be available. We just want to know, ‘If Kieran can make it, why can’t Ryan?’

The Scottish FA made no comment on the issue leaving an explanation to media friendly Professor Jason Leitch. Christie has continued to return negative tests.

Last month Ireland lost two players for their Euro 2020 Play Off against Slovakia following a mix up on seating arrangements on a flight to Bratislava.