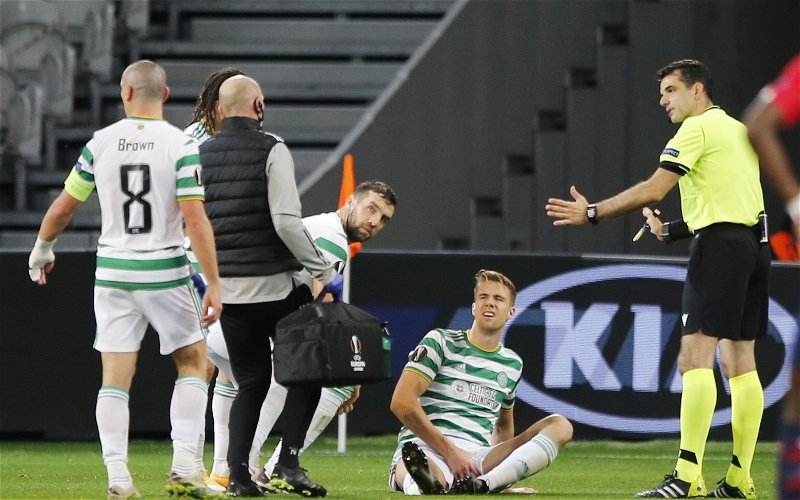 Neil Lennon has ruled out Kris Ajer for today’s Scottish Cup semi-final against Aberdeen at Hampden.

The defender suffered a groin injury early in the second half of the Europa League tie against Lille. After pitch-side treatment he was able to walk off around and was spotted late in the match watching from the stand.

With Chris Jullien ruled out long term Celtic are running short on defensive options but Lennon has ruled out a quick recovery from Ajer.

The Celtic boss told The Sun:

We haven’t got clarity on the extent of the injury. He’s to go for a scan so we’ll know more when we get the results back. I think it’s safe to say he won’t play on Sunday. He just felt something go in his groin and he couldn’t continue.

He was very stiff on the plane on the way back. We won’t be able to determine how long he’s out for until we get the scan results. He’s been playing really well. I just think it’s a culmination of a lot of games, a bit of muscle fatigue in there.

With Jullien also missing the three matches before the next international break Lennon will be desperate to avoid any further defensive injuries at Hampden.

On a positive note Odsonne Edouard returned to action against Lille offering competition to Albian Ajeti for a starting place at Hampden.