Neil Lennon has voiced his concerns about the impact that the November international break will have on his squad.

After three fixtures in October the Celtic boss had to prepare a team for the Glasgow derby without Odsonne Edouard, Nir Bitton, Hatem Abd Elhamed and Ryan Christie after they had joined international bubbles.

With the virus on the rise and Lockdown coming in quickly across much of Europe the risks are obvious with Scotland having what appears to be a ridiculous schedule of:

Rod Petrie and Ian Maxwell of the SFA opted out of the September match away to the Czech Republic in Prague.

Lennon has three vital matches across three competitions over the next eight days but is very concerned about the impact of the middle of the month as he told the Daily Record:

There’s no doubt the damage done last month, losing four players through no fault of our own, was hard to take. Slowly but surely we’re getting the players back but you can see, even in the throes of a game, they’re not yet fully fit.

Maybe the virus can take more out of you than we first thought. It’s a major concern when they go away again. We’ve been pretty stringent inside our own bubble and we’ve had no positive tests for a long time.

In terms of Barkas, they were going to shut the airport in Greece due to a strike over there and we had to get him on a private plane. That’s not ideal. It’s a big undertaking when you may have 15 or 16 players away. But we desperately want to avoid a repeat of what happened last time.

No, international football is essential 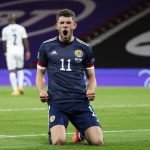 Christie, Callum McGregor and Greg Taylor are expected to be named in the Scotland squad with Leigh Griffiths possibly in contention for a place.