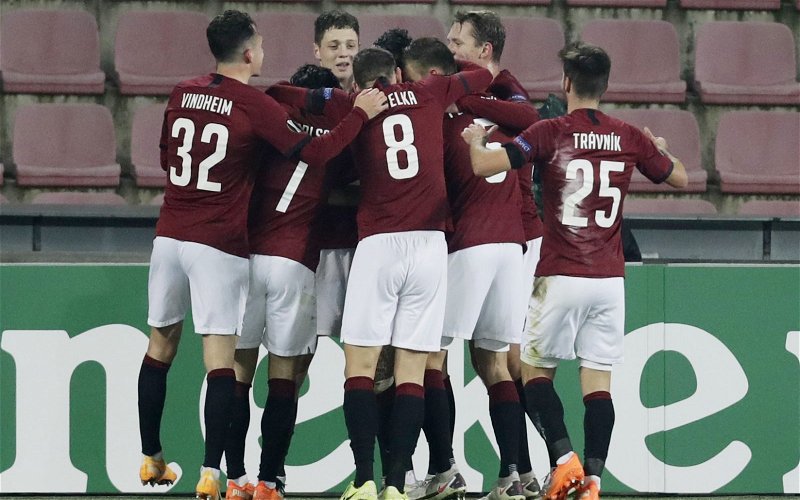 It was a case of same old, same old for Celtic fans as they watched their side crash out of the Europa League with a 4-1 defeat from Sparta Prague.

After Matchday 4 last year the hoops were celebrating a 2-1 win away to Lazio and qualification to the knock-out stage- this year it is so much different.

Odsonne Edouard gave Celtic a 15th minute lead with a throwback goal to last season but before the interval the visitors should have been 3-1 in front but had to settle for a single goal advantage.

Celtic dominated the second half but it was no surprise when Lukas Julis put Sparta 3-1 in front in the 80th minute. In stoppage time Sparta made it four with no hiding place for Neil Lennon and Peter Lawwell

The stats are now looking horrifying- almost as bad as tonight’s defensive display. Two wins in nine matches, 21 goals lost in those nine games with an average of over three per game shipped in the Europa League.

Shane Duffy has given way for Nir Bitton, tonight Chris Jullien came in but the chronic defending continued with the hoops needing two goals to give themselves the chance of a draw

On Radio Scotland after the match Michael Stewart said: “I think that could be the end game for Neil Lennon.”

If Lennon stays we riot

It’s crazy how successful Celtic have been. We have been living through history but we’ve been utterly embarrassing this season and it is not acceptable!

Embarrassing and no way the board can sit back and let this go on! There’s a clear out needed from top to bottom and unfortunately that includes the coaching staff, a fresh new outlook

Lennon was re-hired in the dressing room…

You seen it coming a mile away, teams know to just sit in against us, absorb all the pressure and they’ll be guaranteed a couple goals on the break or from a set piece, happens every game. Lennon has no plan B, it’s fucking laughable