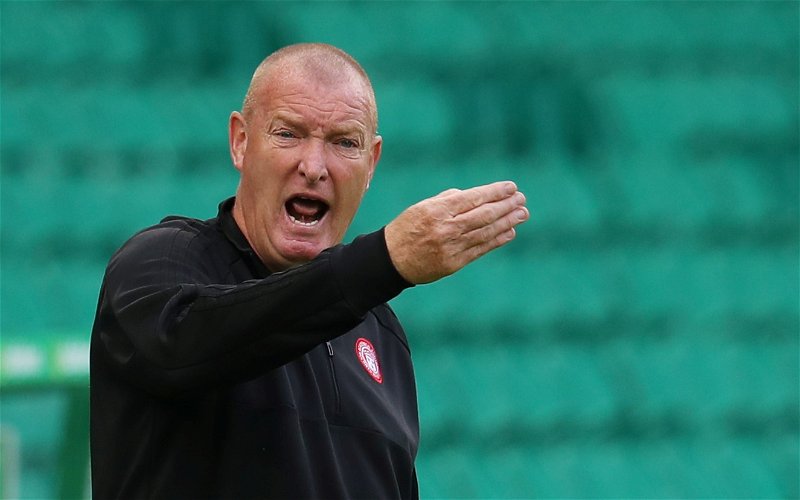 Celtic will face a shadow Hamilton Accies side tomorrow as Neil Lennon’s side look to make it three SPFL wins in a row.

On Saturday Accies enjoyed a much needed win away to Ross County but on Wednesday night Brian Rice watched his side lose 2-0 at home to Livingston.

Traditional injuries and virus related issues have ruled out nine players for tomorrow’s match with the Hamilton boss not attempting to find any silver lining to the situation.

After the home defeat from Livingston on Wednesday night Rice told the Daily Record:

Nine players missing before we start for a club like Hamilton; we can’t cope with that with the size of our squad. That’s not why we lost, Livi were excellent and thoroughly deserved to win.

Seven of those nine would be starters. Five injuries and one virus and three track and trace. Don’t ask me the rules on track and trace, as it seems to change from day to day.

We knew late last night. The heart of my team was ripped out. Scott Martin and Ross Callachan are out. It’s soul destroying.

We could field a team. Nobody is wanting games cancelled. For me to put out a strong team to compete I need some of those players on the pitch. There were young lads out there who were nowhere near the team in recent months. It’s nobody’s fault but it’s the way it is.

We were just hanging on. You could see with the experience and strength Livi had. I’m disappointed one or two didn’t take their opportunity but I can understand it as well.

Me losing nine players, I don’t know what to say. We play Celtic on Saturday and none of them will be back and my goalie went off injured. They’ll miss ten days.

On the opening day of the season Celtic beat Hamilton 5-1, on their last visit to take on Accies the hoops won 4-1 but the match was level after 77 minutes.

Celtic have a few injuries of their own to deal with, James Forrest remains out with no timeline for a return with doubts over the availability of Scott Brown, Shane Duffy and Hatem Abd Elhamed for the second last match of the year.